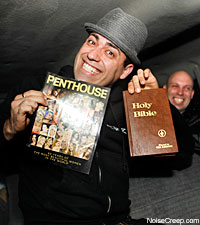 Death by Stereo nabbed their name from the classic 1987 Corey Haim/Corey Feldman vampire flick Lost Boys. Although it was Haim who spoke the phrase 'death by stereo' after a vampire is shot with a crossbow and falls into a stereo – only to be electrocuted – it was Feldman who had a bit of a run in with an intoxicated Death by Stereo vocalist Efrem Schulz a while back.

"You know that club in Hollywood, The Avalon? Back then, it was called The Palace and Less Than Jake was playing," Schulz recounted to Noisecreep. "Feldman is a huge fan of the band, so they always let him come on stage to sing a song. I was wasted, wearing leopard spandex and no shirt, with this long wig. Feldman was singing and dancing and I was so drunk, so I walked out into the middle of stage while he was singing and he was like, 'What is this guy doing?' I was so excited and wanted to show my friend Dave that he was there, so and I grabbed Corey by the neck, saying, 'Hey Dave, look what I got!' I was a drunk monster, dragging him down the hall backstage in the headlock, and he was like freaking out. He was so not loving the headlock!"

Death by Stereo's latest, 'Death is My Only Friend,' hit shelves July 7 from Serjical Strike Records. The band spent the month of June bringing venues to their knees while on tour with Strung Out.