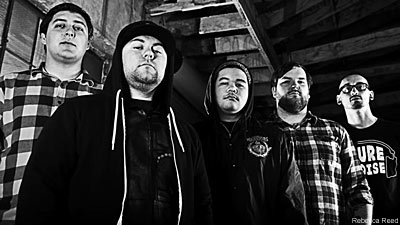 Create Avoid; say it out loud and fast a few times and you'll 'get' the puns implicit in the name- are making music in the vein of classic, DIY hardcore with their debut release, 'Heart Remains.' While that ethic has certainly waned in the hardcore scene in recent years, Create Avoid keep the flame burning and pass the genre's torch to a new breed and generation of kids in the crowds and on the stages.

"Unfortunately, DIY values have been lost on kids who are mostly interested in mainstream music," bassist Jake Round told Noisecreep. "They see bands like Chiodos, Saosin and the Devil Wears Prada, who blow up overnight, and they set unrealistic goals and expectations for themselves. Music is supposed to be fun first, and anything past that is a bonus. Luckily, most hardcore and punk bands still take DIY ethics seriously and try to do as much as they can themselves."

Round further explained that doin' it yourself is a reality in today's marketplace, especially if you want to determine your destiny, saying, "It's great to get an extra push from a label, but the more control you take of your project, the closer you'll get to realizing your vision of what you want your band to be. Create Avoid has done everything DIY."

Create Avoid put their money with their piehole is, paying for 'Heart Remains' themselves. They book their own tours and the bassist puts out our records on his small indie label, Pure Noise. "I think we pass the torch just by setting a good example. Working hard, being courteous to other bands and promoters and trying to make the best music we can while having the most fun," Round said.

Musically, Create Avoid mix several different styles, especially in the percussive element. "Three of us are huge fans of '90s skate punk, like NOFX, Strung Out, so we incorporate a ton of that style of drumming. The entire record is very fast," Round said. "We also incorporate a lot of riffy guitars. We kind of take the things we like about Parkway Drive and As I Lay Dying and try to mix that in with hardcore."

Round and Creative Void aren't deluding themselves, either, with Round saying, "Heavy music is heavy music. We're not doing anything groundbreaking but there aren't a ton of bands in hardcore mixing in metal without getting too far away from the roots. We're a technical band, but for all intents and purposes, we play hardcore with a little flare."