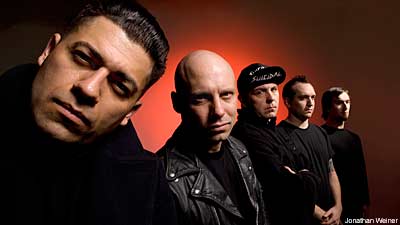 For the 'I Sing for You' video, Death by Stereo play on the concept of a flash mob. "A flash mob is a group of people that ranges anywhere from 50 to 500 people," vocalist Efrem Schulz told Noisecreep. "They go to a public place, like train stations and retail stores, and you can be standing there in a store, and you never know that they are there, until they just freeze at a set time. It's super weird. I

"Imagine being at a station in downtown L.A., and everyone freezes? You're like, 'Am I on drugs?' Everyone is a statue. They are timed and they sometimes erupt into singing or dancing routines. We took the concept into a video."

The band recruited 70 people and took them to the Brea Mall in Orange County, Calif. after an impromptu practice session in a local park. "Everyone in our mob was shopping and all of the sudden, they just ... froze," Schulz explains. "Everyone was air-guitaring over the solo and then singing the chorus. We got chased out by security in their golf carts! In the video, me and [guitarist] Dan [Palmer] are walking through the streets of our town, carrying the ghetto blaster, playing the song. Then, at the mall, I hold the ghetto blaster up and everyone does their part."


While it was a stellar visual and a great experience for the band and the mob, it wasn't as great for some. "Everyone in the mall was freaking out," Schulz recalled. "There was one person who was frozen at a kiosk, right in the middle of buying something, and the sales guy was like, 'Hey, here is your change. Hey? Hey!' But he didn't move."

Luckily, no one was arrested for their antics in the video!

Death By Stereo will spend the fall touring the U.S., Canada and Europe.

Filed Under: death by stereo, DeathByStereo
Categories: Videos
Comments
Leave A Comment
Back To Top