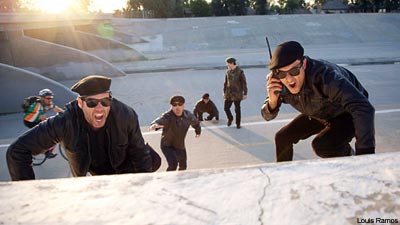 Fans of melodic hardcore and punk are in for a world of hurt on September 29th when Strung Out releases their new album, 'Agents of the Underground.' The California veterans are celebrating their 20th year of operation, but the record shows no signs of the band slowing down. The album is packed wall to wall with shred-guitar flourishes, huge vocal hooks and some of the most intense rhythm section work this side of tech metal.

Noisecreep spoke with guitarist Jake Kiley about the new album, their celebrated history and their unique take on melodic punk.

This is your 20th anniversary as a band. Why you think you survived where a lot of your contemporaries didn't?

The main thing is that we've always given each other space. We usually tour half the year and take the rest of the time to go off and do our own things individually. It's a great way to recharge our batteries in a way. That way when [we do] come back and work on new music, we're all really ready and excited for it. Don't get me wrong -- I love touring and performing, but I appreciate the time away, too.

Do you guys hang out much when you aren't in a touring cycle or in the studio?

No, not really. We enjoy each others company, but it's not like we lived in a house together or anything back in the day. I do love playing with them, and touring is a lot of fun because we have all of these great memories and experiences together.

Although you've amassed a huge and loyal following, you haven't achieved what people would call mainstream or crossover success. Do you think it was just a matter of being on an indie, or was the music a bit too hard-edged for the average listener?

We just have never really been all that concerned with radio hits or anything like that. I would see bands that were having crossover success, and it seemed like a lot of annoying bulls--- to deal with. We didn't want to play that game. When you're on a major label you have to be open to doing certain things [that] we never wanted to.

I like the level we've reached, because we get to play most of the world and still sell a lot of tickets. We've been doing it for a long time now, and we have our core of fans that support us. The kind of control that we have over our music is priceless.

Whereas the band's early days were steeped in punk and hardcore, Strung Out has gotten more technical and guitar-based throughout the years. Was this just something that happened organically when you and the guys got better as musicians, or did you consciously head into that direction?

It's something that just happened on its own. When we get into writing mode, we just let things flow out and it has never been something we plan out ahead of time. We all have so many different influences, so that also helps. I remember when we first came out, punk fans thought we were too metal (laughter). It doesn't hurt that we love groups like Iron Maiden. But yeah, we've gotten much more technical through the years, because we've become better musicians. I practice guitar more now than I did a decade ago. Back then, I would just rehearse our own songs. But these days I really get into it and try to get better.

In terms of the stylistic breadth of the material on 'Agents of the Underground,' do you think it's comparable to 'Blackhawks Over Los Angeles' at all?

I'm not really sure. That would be better answered by someone on the outside, because it's hard for me to remove myself from it. It is a little more straightforward than the last record, because I think we probably went too nuts on that one. We worked with Cameron Webb (Ignite, Pennywise), and he really understands us and our sound. He kept us close to what we're all about and brought out our best performances yet.

Strung Out Tour Dates
on TourTracker.com