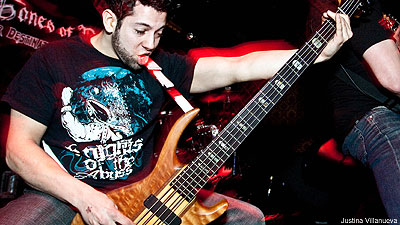 It was still early in the night when the Judas Syndrome started playing at New York City's Fontana's on Feb. 2. A couple songs into their set, I typed a message on my phone and passed it to Noisecreep editor Seth Werkheiser. It read, "This normally is not my thing, but this band is sort of blowing me away." I just had to tell someone that I was being impressed by a band I might have called generic or cheesy before.

If you live in New York City, you know the Judas Syndrome as one of those bands who have offered you their demo and business card at a minimum of shows within the last six months. While that can be a bit of a turn off for some people, the old-school 'demo passing' format is something that I still admire.

"I'm glad it's not a f---ing sausage fest. It's good to see that women still like metal," Judas Syndrome vocalist said after shouting out Liz Snair (of TonesOfDeath.com) and drummer Richard Christy. 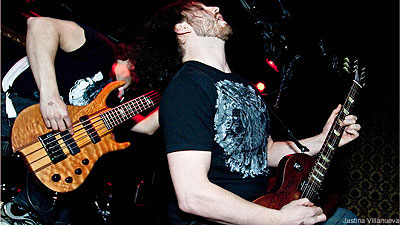 The band plays a melodic, breakdown-heavy form of thrash. And this night, they played it with drive, energy and confidence. If you ever find yourself in a Judas Syndrome pit, you may want to make sure you grease up your elbows -- because it will get dangerous otherwise.

"We are the Judas Syndrome from New York City, I'm sure we'll see you again." You must admit, it's pretty charming when a band that wants you to know they live close to where you live.

While the band remains unsigned, I could easily see them billed on a tour with fellow New Yorkers Emmure or Endwell. Look out for their debut album in March, called 'Underneath Blood Skies.' For now, they have two free songs available on theirMySpace page.