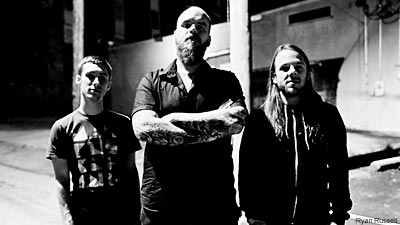 If you go to shows at all, you've probably seen Coliseum. It's just a fact that the band has been crisscrossing their way around the States and Europe with nothing -- not even various member changes-- slowing them down since their 2003 inception. In between the constant tours, the Kentucky-based trio has put out records with Relapse, Deathwish and Level Plane Records. But now the band has announced a new home: Temporary Residence.

Coliseum began as more of a hardcore punk outfit, but over time they have developed something of a rock meets metal sound. This has contributed tot he band being on some bills that don't make sense on paper, but seem predestined to happen in the murk and noise of a club. To record their follow-up to the 2007 long player 'No Salvation,' the band went into The Funeral Home in their hometown of Louisville, Ky. with Kevin Ratterman (of Elliott and Wax Fang fame) producing and J. Robbins set to mix. In a recent interview with the LEO Weekly, singer/guitarist Ryan Patterson explained that Jawbox alum Robbins was sought out because of the way vocals sound after he's worked on them.

Still with no official release date, the album is hoped to be out this summer.