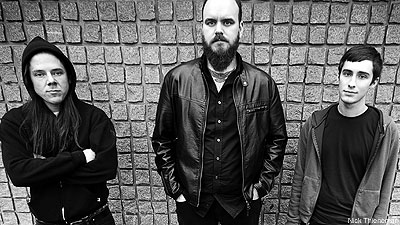 The past 12 months have been interesting for the post-hardcore war machine known as Coliseum. The Louisville, Ky. power trio not only have replaced drummer Chris Maggio with Carter Wilson, they also left their home at Relapse Records for heralded indie rock label Temporary Residence Ltd. and somehow still managed to record 'House with a Curse,' the band's third album. A few songs into the record, and it's obvious the changes have only further invigorated the already ferocious act.

'House With a Curse' finds Coliseum producing themselves with a clear yet punchy mix from J. Robbins (Jawbox, Burning Airlines), and the sonic arrangement does songs like 'Blind in One Eye' and 'Crime and the City' more than justice. The album is relentless in its attack, and rarely does the trio come up for air.

With the album hitting stores on June 22, Noisecreep caught up with founding guitarist-vocalist Ryan Patterson, and asked him about the changes Coliseum have gone through recently and the work that went into 'House With a Curse.'

Take us through the recording process of 'House With a Curse.' Are you the kind of band that tracks and mixes an entire album in just a couple of weeks?

I suppose we are the kind of band that completes everything in the studio in a few weeks, but that's more about the economics of it all. In our idea of what punk and DIY culture means, the economics are part of the art -- accomplishing big things on a small budget is important to us. If money and cost weren't an issue, we'd probably take a bit longer in the studio, although I couldn't imagine us spending more than four or five weeks on the recording and mixing of an album.

On 'House With a Curse' we spent a little under two weeks on tracking and right around a week mixing. Since we were recording at Kevin Ratterman's Funeral Home studio, which is actually above a working funeral home, we started in the late afternoon and would work until early in the morning, usually around 4 PM to 4 AM. We started with tracking drums, spending most of the first day on drum sounds, then finishing up drum takes by the fourth day. Then we tracked bass for a couple of days, then a few days of guitar. We spaced out the vocal recording, so that it wasn't all confined to just a few days, ensuring that my voice didn't get shredded. The last handful of days in the studio was spent doing various overdubs and having all our guests come in to knock out their parts.

We move along quickly, but thankfully the low cost of recording in Louisville with Kevin enabled us to relax and take our time, plus have the ability to experiment with sounds and ideas. All of the tracking was done entirely analog, running through a massive Trident mixing board and recording to two-inch tape on a Studer machine. Recording analog is always a bit slower than recording digitally, but well worth it in terms of the final outcome.

J. Robbins mixed the album. How much direction did you give him before you sent over the tracks?

I gave J. very extensive notes for every song and for the album dynamic as a whole. I've worked with J. before and I'm a big fan of his music and recording, so we knew going into it that we wanted his sonic stamp on the album and his input. This was the first time the band had mixed an album without actually being there in the studio, which we actually loved. I find mixing to be the most tedious and frustrating part of recording an album, so this was the best mixing experience I'd ever had. Rather than sitting there and hearing every little tweak of each track or hearing something like a single bass drum hit over and over, we heard the mix once it was at a point where it already sounded like a song. There was a lot of emailing, downloading, texting, phone calls, burning CDs, and taking iPods to different stereos over the course of the mixing process, but it was still enjoyable and worked out great.

In addition to mixing the record and giving each track his sonic imprint, J. had a big part in the creative decisions of what worked and didn't work with the record. We had planned for him to come to Louisville to produce and engineer the record as well but a last minute emergency prevented him from doing so, but his involvement in the mixing still made a huge difference on the outcome of the record. In the end, we decided to leave a 'producer' credit off of the record because everyone from Mike, Carter and I, to Kevin and J., had a hand in producing the record, so we just left our individual credits to speak for themselves.

Carter Wilson joined the band in late 2009. How much has his playing style changed the DNA of what Coliseum does?

At this point we're seven years in, so the Coliseum DNA is fairly well established, but it has always changed and evolved over the years. Carter joined the band at a point when we were starting to take some new steps stylistically and we were also getting back to some of things we'd loved about the earlier years of the band that had gotten lost along the way. We had already started to write a few of the songs that would end up on 'House With a Curse' and Carter was exactly the drummer we were looking for -- he's incredibly talented and focuses on solid playing, powerful grooves and memorable drum parts. Once Carter joined the band and we started putting songs together, his playing and musical perspective worked perfectly. In the end it was perfect timing on all sides.

The new album will be released through Temporary Residence. Most people wouldn't associate a hard-driving punk band like Coliseum with the label. How did the record deal end up happening?

We joined Temporary Residence in the most natural and casual way possible -- friends working with friends. We were looking for a new label and didn't want to get into anything as silly as 'shopping' for a deal. We knew we had some options that were already there, but we wanted to work with Temporary Residence above all others. They have strong roots in Louisville and over the course of a few years I had become friends with Jeremy, who owns the label. They are a highly successful label that operates outside of the confines of the typical music industry trappings. They also follow the grand tradition of my favorite labels like Touch & Go, Dischord, Merge, etc. They hold the same ideals and ethics and sense of community that we do. They love the band, they love the new songs, and that was that.