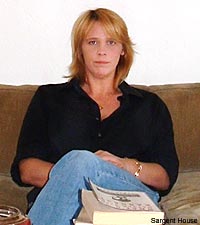 Sargent House is not the typical record label, and the one behind it, Cathy Pellow, prides herself on this. Rather than sit around discussing the next trend and newest marketing technique to get the applause of the blogs, she wants to talk about music and how to help keep good bands on the road.

Pellow describes the core of the label that is home to bands like Red Fang and the vinyl output of Russian Circles as "about community and helping one another." But if you're a new band thinking of sending a demo her way, it's best if you don't. Sargent House holds a no submissions policy.

"People find it to be weird," Pellow laughed in a conversation with Noisecreep over the phone. "We'll find you on our own or through people we love, trust and work with. We don't need to look. I could throw a dart and hit 10 bands that really deserve help. So the ones that are out writing to me, 'Check out all our marketing stats,' [they] don't get what were all about."

In 2006, Pellow formed the label out of frustration of watching bands she loved getting caught in traps of bad deals that ended with no money for the artist. To avoid what she calls the "us against them" attitude that happens in the business between artist and their hired staff, Sargent House does everything in house: management, publicity and even video work.

If for some reason you find yourself as one of the lucky bands to get asked to join the Sargent family, know you're going to get asked if your gear is insured. "The first thing I do when I sign a band is I insure them," Pellow remarked. "Bands don't understand that insurance for all the gear is really inexpensive. They all assume, 'We can't afford that.' But $150 a year can insure all of your gear, which is invaluable, because everyone is getting they vans ripped off."

According to her, all bands, no matter what their size or experience they always say they don't have insurance. "We've had claims where it cost $100 and someone gets back $5,000 worth of gear," she said.

Pellow has a desire to take things further on making sure bands don't get their tours ended just by thievery, she wants to help out bands not even on her label from the dreaded curse of the van breakdown. "I'm trying to set up my own band charity," she laughed, naming herself a "band aid."

She explained, "I want to create a fund, like a Red Cross fund, where we have these charity drives to keep a pool of money to help bands in need." One band came to mind regarding almost having to end a part of their tour simply because of cost to fix the tour van. "This happened with Young Widows on their tour, and they were on the other side of the country and it's like, 'We're gonna have to stop.' That's crazy that $1,000 to fix the van is what's going to bankrupt your band and disable you," Pellow said.

Though still an idea at this point Pellow wants her project to be a reality, saying, "I'm just trying to figure out a way, if all bands just kicked in $10 a year and it registered your band to be able to apply for this, if you're in an emergency so we could make sure it's bands that are hardworking and not just weekend warriors."

Charities in the arts like this are not uncommon. "It's no different than what actors have for the old age home for old actors," said Pellow. "They do benefits and raise money to be able to help people in need."