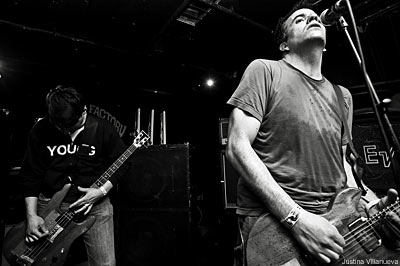 "The thing I will say about the Web site is, when two years ago, no one was doing anything but counting on MySpace, I was like, 'I don't know, is it worth it to put that sort of energy towards a Web site?' Now, no one pays any attention to MySpace. Now, everyone's interested in Facebook. I'm telling you that idea of 'just build your own Web site and keep doing your own thing,' I think that will work," Austerity Program guitarist Justin Foley told Noisecreep.

After chatting about the growth of the Internet for a bit, bassist Thad Calabrese sarcastically added, "I'm still not convinced this whole Internet thing is going to take off." As it turns out, the duo get along pretty well. For a band that can only put out a limited amount of material, that makes sense.

"For this band, song per year of existence is low. I'm not even sure if we're at one," Calabrese said. There was an EP in 2003, an LP called 'Black Madonna' in 2007, a two-song EP in 2008 and the band's latest effort, which is a four-song EP called 'Backsliders and Apostates Will Burn.'

"It's uncommon for people who [each have two or more children] to be doing this sort of stuff. You have to sort of make decisions at this point about what you want to do. So we can't really tour too much, which is too bad. I really love doing it. But I'm not going to not be in a band because we can't tour," Foley said.

"The EP was easier from my perspective than the LP. The gestation period of an elephant is two and a half years. That album was like that. And that was difficult," Calabrese said. "I feel like there was a lot of strange discussion about little, tiny parts of songs that we played tonight. That if people heard them, they might not even heard it. But I don't think that was painful. I look back at it now and I think, of course, that's what you do when you make an album: you debate." Calabrese's point, in turn, sparked a healthy mini-discussion about some parts of songs.

"And no, you were totally right about that. We shouldn't have put it in there," Foley told Calabrese as I stood there giggling. He is right, being in a music team is all about debating. And that is what makes the Austerity Program's art worth a listen.

Their latest release, 'Backsliders and Apostates Will Burn,' will be out May 4. It's for fans of the Jesus Lizard, Shellac and Young Widows.