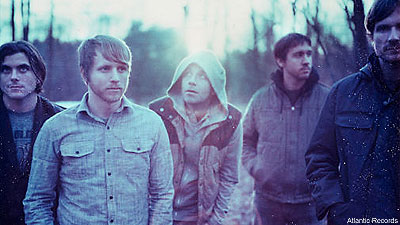 Featuring former This Day Forward member Colin Frangicetto on guitars and ex-Saosin vocalist Anthony Green, who hits notes so high you'd think he was a girl (if you didn't know any better ) or that someone was squeezing his testicles when he sings, 'Blue Sky Noise' is ready to make its mark on audiences.

Frangicetto told Noisecreep, "2010 has already been a wild year for us. We're still together and still in love, and we've given birth to a record that's been in the womb for over two years, and 'Blue Sky Noise' is its name." The album is lush and certainly will appeal to the metal kids who go to Warped Tour and that have open minds.

"For the rest of the year, we'll be bringing the new sounds across the globe. We're some lucky bastards," Frangicetto also said.

Download Circa Survive Songs
Filed Under: circa survive, CircaSurvive, Saosin, This Day Forward, ThisDayForward
Categories: Interviews
Comments
Leave A Comment
Back To Top