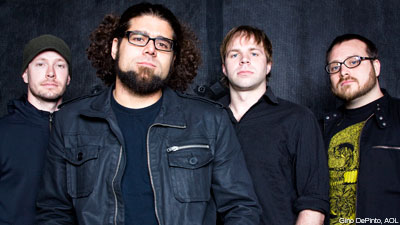 Prog rock fans, rejoice! There's a new Coheed and Cambria record in stores called 'Year of the Black Rainbow.' Like all of Coheed's previous efforts, 'Black Rainbow' is a concept record that serves as a prequel to frontman Claudio Sanchez's 'Amory Wars' storyline, the same storyline that's unfolded across the band's first four records. According to Sanchez, 'Black Rainbow' is essential listening for fans of the Coheed story, as it explains a lot about Sanchez's elaborate sci-fi saga.

"It's the origin of Coheed and Cambria, and for those who might be apprehensive about diving into that world, this is the beginning," Sanchez told Noisecreep during a recent visit to our downtown offices. "So, you know, you don't really need to know all the conceptual stuff from the other records to really jump in. This is number one. You know, it is the origin tales of Coheed and Cambria, and it just kind of sets up the world that's behind the record. It certainly answers a lot of questions that were posed when [2002's] 'The Second Stage Turbine Blade' came out, and started getting told in the comics and things like that."


Of course, 'Black Rainbow' is Coheed's first disc to feature the talents of former Dillinger Escape Plan drummer Chris Pennie, who told Noisecreep he's never been in a middling band. "I try not to do that," he joked. "I mean, every experience that I've been in has been a pleasurable one. It's great to finally, three years later, the flip side of all of that now, being able to record a record, and have it come out is great. It feels great."

Sanchez described how this recording process was different, thanks to Pennie's inclusion. "On a song like 'Guns of Summer,' when I started messing with that riff, it seemed perfect for Chris. It was like, 'Let's kind of test the boundaries with this one.' That was the first song we started really messing around with. Chris is a tremendous addition to this band. Like, just being a great work horse, and I think everyone wants to match like [his] attitude."

And while Coheed won't be opening for Iron Maiden and Dream Theater this summer, guitarist Travis Stever did talk about a rumored tour his band would love to get on.

"I'm pretty excited for the tour we're about to do," he says. "We are touring with two really great bands, and I know a lot of bands have to say that, but I've been listening to the new Torche record quite a bit, and Circa Survive we know and we're friends with, and they have a new great record. But, [touring with] Faith No More would be amazing, too."