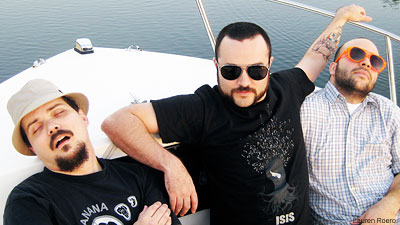 Sometime between 1:30 AM and 4:00 AM on May 14 the all too common tour horror story happened to Torche: someone broke into their van. "Some of us were just a couple blocks away at a friend's house while this happened. Some of our bags were still in the van because a couple of us were out, and were planning on meeting up with the others at our friends house," bassist Jonathan Nuñez told Noisecreep. They did the usual tour move, parking in front on an elementary school, almost always a safe spot.

The Florida-based band soon discovered they had been robbed -- and we're not talking just a guitar and some cables in a quick grab and run; this kind of break-in takes some time. Some items missing include three guitars, pedal boards, computers and passports -- which forced the stoner rock trio to cancel the Canadian leg of their tour with Coheed and Cambria. "The gear wasn't insured, and is something we're looking into," Nuñez admits. "We have done our best to get the word out to everyone we know in hopes that we can get our stuff back. There's some one of a kind things that were taken and gear were very attached to."

At the time of publication none of the gear had been recovered.

A loss of this nature is the kind that not just ends tours. Some bands even call it quits after discovering all their equipment is gone. Hydra Head Records set up a Paypal account for fans wanting to help out via donation. Nuñez, Steve Brooks and Rick Smith have all been astonished by the level of support they've received. But the shows must go on. This is what Torche has come to do, so they have set up a series of house shows to play before they meet up with the Coheed and Circa Survive when the tour returns to the States.

For Torche, this entire tour has been a challenge, though no one could have expected this nightmare to happen. "On this tour it shouldn't be no surprise that we're stepping out of our genre, or band in genre we'd usually be on the road with," says Nuñez. "The crowds have gone from ... 'getting us' to 'absolutely not getting us.'" Both tourmates have been a huge support during this time, though. "As soon as they got word of what happened they immediately began to help us, and we appreciate it and are glad to be on the road with such kind people."

The band has released a full list of everything stolen:

-- Black Gibson Custom Les Paul w/SKB hardcase (has chip on the top L side of headstock, visible neck repair on top side of the neck, may have missing paint opposite vol and tone knobs if sticker was removed)

Torche have an EP follow-up to 2008's 'Meanderthal' duo out later this year on Hydra Head.