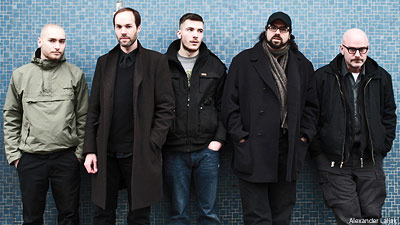 Chris Spencer has done a lot in his musical career. Most notably, he's known as the blistering voice and founder of New York City hardcore mainstays Unsane. But he's started a new band, Celan, which was birthed during a conversation about recording in a specific studio – the legendary andereBaustelle Studio in Germany, where the last Einstürzende Neubauten records were recorded.

"Unsane was on tour and I was in Berlin, and I had a couple of days off," Spencer recounted to Noiseceep, discussing the night Celan took form. "I went out for dinner and drinks. I met Ari [Benjamin Meyers] through a mutual friend." In addition to Meyers reputation as a composer of classical works and experimental forms of electronica, he is a former member of Einstürzende Neubauten.

"We were just talking, shooting the shit, and talked about maybe doing something together," Spencer said. "And he mentioned Einstürzende Neubauten had their old studio here that they weren't using anymore. I had always wanted to work in that studio. Once he mentioned it, I said 'that sounds incredible.'"

They kept in touch and decided a band had to be formed – a new kind of noise had to be played. So they sought out others, finding Franz Xaver and Phil Roeder of Flu.id, as well as Oxbow guitarist Niko Wenner. Then the band headed into andereBaustelle Studio with no pre-production completed for any full song.

"As individuals," Spencer explained. "Everybody just thought of what they wanted to pursue and brought that to the table when they got there." The plan was to write and record in the studio like it was a bunker. "They kind of gave us the keys for two weeks and let us practice and take over the place and record for like three days."

Making an album this way is hardly new for Spencer, as Unsane did this for 1995's monumental 'Scattered, Smothered & Covered.' They famously lived in the basement of Amphetamine Reptile Records during the entire process. "You hole up and work intensely for a while. You're in the studio all day and everyday, and you're not worried about money for the studio since it's one big block of time," Spencer said about this form of creation. "You can relax. It's a good way to work, I think."

Of course this method of writing and recording an entire record at once could end badly with friendships strained and a record compromised – but for Celan, everything was smooth. "Everybody clicked. It was amazing actually." Spencer breathed an air of pride for the forthcoming album 'Halo,' saying, "It's real surprising, it could have been a total disaster."