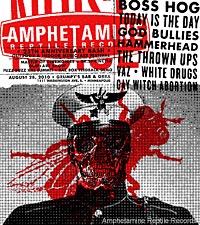 If you're talking noise rock (and you should be), Amphetamine Reptile Records is going to be at the forefront of the conversation. Tom Hazelmyer, marine at at the time, founded the legendary label in 1986 to put out records for his band Halo of Flies. But soon the label, more commonly known as AmRep, ended up releasing groundbreaking albums of feedback from bands the likes of Helmet, Unsane, Today Is the Day, Cows and the Melvins.

And now we are here, with AmRep basically defunct Hazelmyer has put together a massive 25th birthday party for the label in Minneapolis on Aug. 28.

"Only a couple months now," Hazelmyer told Noisecreep, detailing that the festivities were not long-planned. "It started in February. as I was putting together the Neo OBSOLETE Post NASAL Surrealistic CARNAGE show in Texas."

This party will celebrate the art and prints as the Texas one did, but this bash will have the on stage sounds of the Melvins, Boss Hog, Today is the Day, a reunited God Bullies and so many more. "I never expected to get past the first couple seven-inches, so it's all been a bonus past that point," said Hazelmyer, admitting he's not aware of the new crop of bands coming out waiving the AmRep noise flag. "I've not been playing close enough attention."

Getting some of the bands to reform just for this show proved to be a daunting task, and no matter how many people complain on message boards some are just not going to play. "We prompted, pleaded and cajoled Hammerhead to get back together like a 16-year-old trying to get into a girls pants ... and it worked!" admitted Hazelmyer. "I always knew those guys wanted it! On the other hand, nothing has worked on the Cows. Apparently you can't even lead 'em to water, let alone drink."

Hazelmyer is looking forward to every part of the party, but some of the band's are going to be extra sweet for him. "I guess I'd have to say the Thrown Ups, as I didn't see those guys a whole lot back in the day as they never made it out of Seattle, and didn't get a ton of shows when I was first putting out seven-inches by them. Also the one band I haven't seen live -- White Drugs from Denton Texas. We did a split seven-inch together -- with H•O•F -- that's coming out at the show, and they're my favorite new band of the past couple years; so much so I let 'em use the semi-retired AmRep logo on their new LP."

There are rumors of many more vinyl goodies to be only for sale there, but Hazelmyer confirmed there will be custom pedals as Baz Box will be doing a Fuzz Buzz Kill Summit demonstration. "Barry Henssler (Necros) is doing handmade custom guitar effects (Baz Box). The first one he's doing is the FUXX BUZZ KILL Box, by HAZE XXL (hey that's me!). Anyhow, Barry, Jon Spencer, King Buzzo, me and some others will be having a feedback party in the bar after the show. Should be a blast. Also selling the first 10 made, as I'll be hand painting those boxes."

A celebration like this is only a mark of a legacy that will never fade.