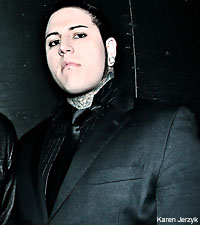 Leave it to former Bury Your Dead guitarist Eric Ellis to look at a potentially earth-shattering event in a positive light. The 24-year-old guitarist, who left the band after a serious, life-threatening incident occurred while on tour in 2008, looks at what happened to him as something that opened up his life to new possibilities.

Noisecreep spoke to Ellis, who is now enjoying life behind the scenes as a producer in his hometown of Jacksonville, Florida for up and coming, exciting new metal bands like Catalepsy, in what was his first official interview about the incident. He claims he is "100 percent in love with producing" and wants to use his expertise and experience help young bands rise to the top. He also wishes nothing but the best for his former band, the Massachusetts metal wrecking crew known as BYD.

Can you catch us up with what's been going on with you since the incident?
This is first time I have spoken on this issue, because I was concerned about the integrity of the band, whether or not I was in the band. If I didn't continue to tour, I didn't want the fans to think it was some dramatic thing or some charity thing, like "I can't tour anymore because of what happened! Woe is me." I'm not that kind of guy and they are not that kind of band.

That's a little cryptic, but I'm picking up what you are putting down. Why haven't you spoken about what happened?
Any time you placate a rumor about an event, even if you are speaking truthfully about what happened, people will always draw their own speculations. The band has a new guitarist and they are recording. I'm doing my thing. What happened that night on tour last year was that I was walking back to our vehicle after a show in Milwaukee and had a gun drawn on me. It was for his gang initiation. I was beaten with a hammer and a bat. I had 56 contusions down the side of my body. I look back and am glad that didn't happen to a kid at the show, or a girl coming out of the show. I am almost glad it was me.

That's certainly altruistic of you. What happened after?
I flew home and had an epiphany. I was faced with the concept of not touring. It's crazy, since I grew up on the road. It was like I got a second chance. When the kids who did that to me get out of jail, maybe they will get a second chance, too, and realize that life is not the way for them.

Was your split with BYD amicable?
Yep. The ride was unlike any other thing I have experienced. It was my life. Now, I have a studio in my house. I produce. I live on the beach; it's a beautiful, comfortable setting for bands who record here. I put them up in my house. My studio is called Superior Productions.

What bands are you working with?
I work with younger bands, like Catalepsy, who are on Stillborn. We are able to give bands an expensive sounding record, without the high price. We take young bands and capitalize on what they are good at. Noetic is another band I am working with. I have my own project called Gevicht; it's top secret and unsigned. I don't even have a MySpace page for it yet.

Tell us about your clothing line.
It's called This City Clothing and we have shirts, hoodies. We'll do a woman's line, jeans and sneakers soon, too.

How did you get to be so zen about the traumatic incident?
I've been positive since the first hammer blow to the back of my head. It's like the event put me in a parallel to my old life. I loved touring, but fell in love with production and the event helped me to see that. I just want young bands to remember that they need to enjoy being in a band. Anytime at all is all the time in the world when you are in a band.

Filed Under: 1514135, Bury Your Dead, BuryYourDead
Categories: Interviews
Comments
Leave A Comment
Back To Top