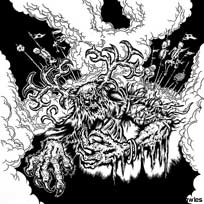 The lineup and running order for the second annual Heart of Winter Fest has recently been released by the festival's creators, Drew and Elway of Richmond, Va.-based black metal destroyers Bastard Sapling.

Elway took a few moments out of his hectic schedule to give Noisecreep the lowdown on what is rapidly becoming one of the most vital and interesting DIY metal events on the East Coast. With the way things are going, Heart of Winter has the potential to become something even greater than it already is. After all, the mighty Maryland Death Fest started out on just as small of a scale.

"Heart of Winter Fest is a DIY metal fest in Richmond, Va. with an emphasis on black, death, doom and punk metal. This will be the second (almost) annual Heart of Winter Fest, with the inaugural one taking place in December of 2008," he wrote from a hotel room at an undisclosed location out West, where he was catching a few Z's before returning to his place of work's annual convention the next day. Even underground black metallers have to attend company functions sometimes, and Elway's white-collar day job masks his pitch-black nocturnal activities quite well.

Booking a one-off bar show is enough of a pain; imagine the headaches, heartaches and wallet-aches that come with plotting a two-day, multi-band festival. What -- besides Satan, of course -- could have possibly possessed these two young men to undertake a task of such Herculean proportions?

Elway writes, simply, "Our inspiration has derived from ourselves and others. We feel and identify our thoughts and emotions. We create through music and other forms of expression. Through this and other factors included, but not limited to, friendships created while living in Richmond with people in and beyond Richmond, we have an outlet in which to create this event. And, we like to party!"

Shadow of the Destroyer