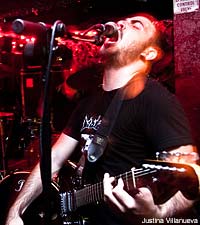 Chicago's Castevet make some rocking, instrumental post punk. They kind of sound like Russian Circles if only they were bigger fans of Taking Back Sunday. If that sounds like a different language to you, then good. The Castevet you really care about has nothing to do with those guys. In fact, the Castevet you want to learn about is a Satan-hailing, grind-praising three piece from Brooklyn. Sound more like your tongue?

Before they acquired Defeatist bassist J. Scott, Castevet opened for Bloody Panda at Union Pool in August. Their set, which began with a strange hum, ended abruptly when guitarist Andrew Hock's (ex-Biolich) blew out his guitar amp.

The demise of their set brought an awkward turn to my gut, and I liked it. A couple weeks later, they played Public Assembly with Mick Barr and Gnaw. They finished their set successfully. In October, Castevet opened for Woe. Back at Union Pool again, Hock broke a string in the middle of the band's last song. That place just has it out for them.

The following night, after the second Union Pool show, the trio brought their blackened souls to Manhattan's favorite metal basement, Lit Lounge. Their experimental, mathy black metal was the perfect prep-set to grinders Meek Is Murder -- whom played their second show ever that night as well. All three members also are either currently in or have been in N.Y.C. grindcore bands. Drummer Ian Jacyszyn currently blast-beats for the most fun pornogrind outfit in New York, Compremesis.

New York's Castevet is set to put out a full-length next year. It's currently being recorded by Colin Marston (Dysrhythmia, Krallice, Gorguts and a bunch of other nerdy metal bands you should check out). Check them out at a show soon, just not one at Union Pool.