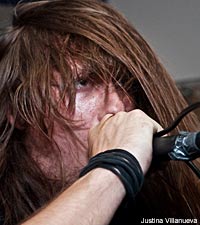 ABC No Rio is home to activists, artists and the straight-edge crust kids of New York City. Yet on the afternoon of Oct. 3, the white-walled room filled with fog and weed lyrics. Cannabis Corpse was in town.

After asking the all-ages crowd if anyone had a prior conviction, frontman Weedgrinder said, "If you have a prior and it's weed related, this one's about you!" The band proceeded to play 'Sentenced to Burn One,' their version of Cannibal Corpse's 'Sentenced to Burn,' at the DIY venue. It's the tiny kind of space that Cannibal Corpse can't recall ever playing at.

"It sucks when you're not 21 and you can't go to kick-ass shows like this one," said a young woman before passing around a jar to collect donations to help repair the building.

The area where the bands performed had an art sculpture attached to the ceiling, which almost all the paint had peeled off of. A couple of moshers noticed that, then they stomped too hard -- the wooden floor creaked downward. It's ready to cave in, and 156 Rivington St. is falling apart.

The show included Mutant Supremacy and Infernal Stronghold. Late night Oct. 3, Cannabis Corpse, Infernal and Attake played The Charleston in Brooklyn -- a 21-plus bar and basement venue. You can support ABC No Rio by making a donation.