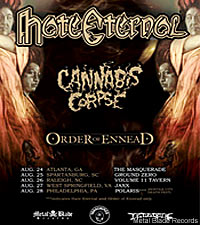 Death metal warlords Hate Eternal have confirmed a small handful of August tour dates along the East Coast with Cannabis Corpse and Order of Ennead in tow. The band will the head home to Florida to write the follow-up to 2008's 'Fury and Flames.'

Hate Eternal's Erik Rutan checked in with Noisecreep, saying, "I just finished an Australian/New Zealand tour with Nile and Hate Eternal that was just brutal and fantastic, and now I am back to work at the studio. I just produced the new Malevolent Creation album on Nuclear Blast, mixed Pathology for Victory Records and stem mixes for 'Guitar Hero 6,' as well." Think you have a busy schedule? Bet you can't top that workaholic calendar.

"I have some other projects brewing right now also," Rutan said. "I am getting ready to start recording the legendary hardcore band Madball at Mana Recording Studios on July 1 and am super excited to be a part of it."

As for work on his band, he has been doing pre-production. "Jade, J.J. and I have 10 songs started right now that are sounding very unique, awesome and heavy as s---, and we shall continue to do more pre-production in August after we do a week of shows with Cannabis Corpse and Order of Ennead leading up to the Hostile City Metal Fest in Philly. Fly Eagles fly!"

OK, so anyone who follows this writer's ''Creep Show' interviews knows I am a die-hard Philly sports fan and often engage in verbal sports battles with bands I interview -- but I admit that no, I did not put Rutan up to singing the Eagles Fight Song mid-sentence, although I love and respect him more than ever for it. He plans to mix the new Abysmal Dawn album for Relapse and then to start recording the as-yet-untitled new Hate Eternal album in October or November. It's scheduled for an early 2011 release.