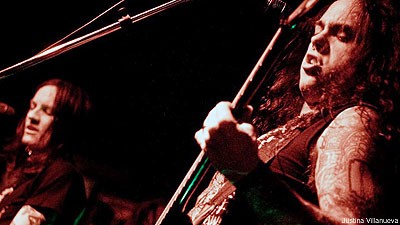 While a good majority of the metal world was celebrating loud and heavy music at the New England Metal and Hardcore Festival on April 23, a very small minority of Brooklyn, N.Y. was celebrating old-school death metal with Mutant Supremacy. The four-piece takes pride in keeping it real brutal a la Morbid Angel and Carcass.

The upstairs room at the Polish nightclub Europa was not as full as it would have been later that night -- when it transformed into a dance club. Yet Mutant Supremacy held their own with a set that caused involuntary headbanging. The guys in the band might look pretty young, but they are really four old souls sporting nihilist back patches and still recording their demos onto cassette tapes. Lucky for you, they have a couple for sale.

"The tape we're selling is a practice space demo of four songs that we have for the sake of having something until the real record comes out," frontman Sam Awry told Noisecreep.

The 'real record' was recorded at Full Force Studio -- the same place where Suffocation tracked their last three albums. With eight songs recorded and mixed, Mutant Supremacy's debut just needs the artwork to be laid out before the band presses CDs and LPs themselves.

"In the meantime, we weaseled our way onto the soundtrack of the video game 'Splatterhouse' -- which will be out later this year."