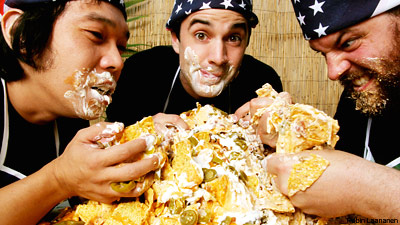 The raw dudes in Big Business have made a video, and it's not what anyone expected for the band's first official video. It would have been understood to see them mix hijinks with some stoned sludge performance shots. But no; that's now how Big Business roll. The video for 'The Drift' is dirty saloons, buzzards, six shooters, and polar bears. Oh and it's all done in a dazzling stop animation that uses the artwork from the band's ten month old 'Mind the Drift' album.

Drummer Coady Willis told Noisecreep back in May that the gatefold artwork for the band's third full-length came together from singer/bassist Jared Warren's odd collection of linen postcards. "When we go on tour he'll go to these swap meets and weird junk shops and there will be these really old silk-screened -- I don't know if they're lithographs or silk screened -- they're printed actually on linen cloth," Willis laughed. "Some are really creepy."

"They have this saturated color. It's almost like colorized photographs printed on cloth. So he has stacks and stacks of them, and he had this idea to put them together and making composites of them to where it's different skies over different landscapes. It's a totally different effect."

Wesley Belak-Berger took this entire artwork of the album and put it to a motion that leaves more expensive videos in the dust.