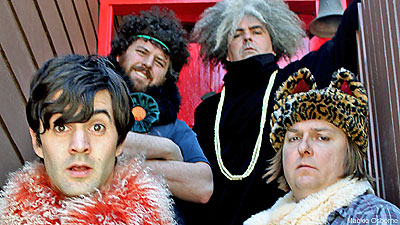 There are no rules for the Melvins. OK, it has to be loud. It's been an ear defining 26 years of down tuning for the legendary act, but who would have predicted a military drum cadence would open the band's forthcoming album, 'The Bride Screamed Murder'? Well it turns out 'The Water Glass' has been a long time coming, as Melvin head honcho Buzz Osborne told Noisecreep he had been wanting to do this song for some time -- and with the continued mirrored lefty/righty percussion of longtime drummer Dale Crover and Big Business kit man Coady Willis, now is the time.

"I think it's a really good mix of heavy metal, the cadence thing," says Osborne. "I really worked really hard to get that thing to work, because I wanted it in the scope of a song."

Listen to 'The Water Glass'

'The Water Glass' begins as any album opener for the Melvins does, right out the gate a riff exhales to only fall to the floor as the military shouts begin -- it's alright to smile, this is a fun one but done in a very odd tuning. The guitarist wouldn't reveal its secret, he's a magician with the mushroom cloud hair.

"I won't tell you what it is; it's very strange. Fortunately for us, with the ability if we say we want to do something, we can pull it off. We're surely not afraid to. That's why that song had to be first on the record. I'm not cheaping it by putting it later."

Putting 'The Water Glass' later would have just made it the cut away to fade off. "We're serious about that song as serious as anything else we do."

'The Bride Screamed Murder' hits shelves on June 1 via Ipecac.