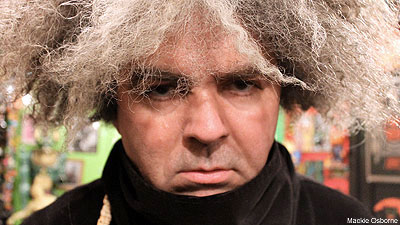 'The Bride Screamed Murder' will get added to the unruly canon of the Melvins in under a month. The legendary frontman Buzz Osborne described it to Noisecreep as one of the better albums the 26-year-old band has put out. "Surprisingly enough," Osborne (who also goes by King Buzzo) giggled through the phone. "I think."

'The Bride' is what you would expect and not expect from the Melvins -- but that's the rule for every album from the band that seeks to never repeat. There are the fast burners that the band has focused on since the fine gentleman of Big Business (Jared Warren and Coady Willis) joined in 2006 as bassist and second percussionist. But it has long-player sibling in attitude and grace. Check out its soft bass tone and delicate balance between bright and nasty riffs; the giveaway where they meet is a sludge g-spot. 'The Bride Screamed Murder' is an album much like its elder 'Stag' for these reasons, and Osborne sees this, even admitting both albums had the same ease and jest in the studio.

"'Stag' was a really fun one for us to do. I had a lot of things I wanted to do musically that we hadn't accomplish up until that point, and it all came together nicely," the guitarist recalled. "At the time, which is really funny, it wasn't really openly received. There wasn't a lot of positive responses to that record."

The album, which was their final under the dominion of the Atlantic label in the '90s, was seen on first published reviews as a low point for the band. Of course Osborne disagrees. "I didn't think it was any worse. I don't know what people were complaining about. It was the third album we had done in three years, and it was different than the last two. Actually it was the fourth we had done in three and a half years," he corrected himself. The band put the drone-laden 'Lysol' to tape nine months before the slum riffs of 'Houdini' came out.

It seems almost a tradition but most Melvins albums that get shredded by fans and critics get rescinded later when the records get looked back on. It's almost like people are catching up to the band, finally getting what Buzzo, drummer Dale Crover and whoever was in the band at the time were doing. 'Stag' received some of the worst reviews the band has ever received, but now those 16 songs are considered a Melvins gold star of noise. "I can't figure it out," he admitted, wrestling with the rear-view judgments. "I always find those things to be interesting, and I disagree, but time will tell.

"I can't expect everyone to know what I'm thinking, and even if I explain it to them with charts and diagrams it still doesn't mean they are going to get it right. They have their own ideas of how things work regardless if I tell the truth or not. In a lot of cases the truth doesn't set me free."

Osborne explained his current acceptance that truth itself isn't necessarily an evasion, saying, "One of my favorite things as of late has been it's only a lie if you don't believe it. As long as you believe in somebody's bulls--- story, it's not a lie." But with all the years and all the studio time behind them, there is no way Osborne could really care about who says what about the records he prides -- if he did, the Melvins probably wouldn't be here now. It's been said before, but selfishness is key to keeping an art pure. "I just move forward, continuing to do what I'm doing and I'm happy people are interested"