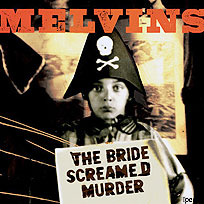 On the same day the legendary Melvins begin their tour with Totimoshi -- and Isis on select dates -- the founding fathers of sludge and ambient feedback will release their 18th (because remix albums don't count) full-length, 'The Bride Screamed Murder.'

This will be the third album to feature Coady Willis and Jared Warren of Big Business on second percussion and bass, joining the core of Buzz 'King Buzzo' Osborne and Dale Crover. As is the case with any Melvins release, it's best to have no expectations on what the album will sound like; but if '(A) Senile Animal ' and 'Nude With Boots' illuminate the path the band continues on, it's safe to anticipate more of the same lumbering riffs with little meanderings. According to an interview in December, Osborne admitted plans at the time to record a song he "wrote in the '90s."

Though the direction is still unknown, the band embraced the window of technology a bit more this time by giving fans a quick look at the recording sessions for 'The Bride Screamed Murder' with live streams of Osborne tracking vocals and Crover being punished for falling asleep.

'The Bride Screamed Murder' will hit shelves on June 1 via Ipecac.