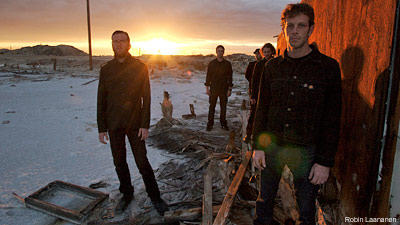 No doubt you've heard 'Wavering Radiant' from Isis now that it's been streaming here all day pulsing out the record's waves of guitars the teased tension and tangling melodies that all form the crushing landscapes of each song. But 'Wavering Radiant' is something very special for Isis, it's more than just the 5th studio album. 'Waving Radiant' is a record where the band faced many of their own created patterns of repetition in writing and recording and broke them to build anew.

"I think our last record was difficult for us, but because of that we were able to come into this one stronger. I think it was a necessary stepping-stone for us," Aaron Harris, the man behind the wall of perfectly timed rhythm of Isis, told Noisecreep.

On 'Wavering Radiant' the entire band stepped out and worked with a producer new to the band. In Aaron's case he began to look at his role as the drummer in an older way, a way about presence and conciseness rather than just being the hammer of the beat in a metal band. So tap that button and read more to find out what it took to make 'Waving Radiant' and why it's a record for your headphones.

For 'Waving Radiant' you guys didn't have a deadline for a recording date overhead, this was a new thing for Isis. How did this affect the songwriting process?

It just enabled us to dissect the songs a lot more. Focus more on the writing. Demo things, take stuff home, and work on it. Even if we weren't getting anywhere in a song would could set it on the back burner and say, lets return to this one later, move ahead, channel more ideas, where in the past we would bang our head against the wall, until we came up how to evolve the song, or whatever what we were working on. It was nice to say, ok. Lets come back to that, it obviously isn't working, let s go try something else.

This allowed us to be a little more sane in the process. It's really frustrating to keep showing up to practice and working, banging your head against the wall and wishing you could move ahead to something else. When you're working on a dead line, it could be a good thing or a bad thing, to have this time to work on stuff.

Compared to the last few records how much time was spent writing 'Waving Radiant'?

It's been about two years schedule wise since the last four or five records. 2000, 2002, 2004, 'Absence' in 2006, this one is 2009. So you know. There was three years between these two records this time. But you know it didn't feel like that much longer between them to me. We were busy that whole time, but it was nice to have that much time. It was nice to approach it this way, and say hey, lets get 90% of the writing done, then commit to a recording date. Instead of the way we worked before, let's set a date and work towards that.

I can imagine this new freedom to work let the songs breath and evolve more naturally.

Yeah, but I think on the flipside it could be a dangerous thing, where you give yourself too much time you just work yourself into a corner where you totally broken down the songs to a point to where they just become bad.

Now 'Waving Radiant' is the first album in a while that you didn't work with Matt Bayles for the production. What brought about the change to go with Joe Barresi?

I think from our perspective and Matt's perspective... it just became... it was really nice to work together and there was no problem there, but it had just become old hat in a way. There was a process we were used to and we followed it. I remember on 'Absence' it felt kinda routine and I didn't realize until this record that it felt really routine. It was nice to go with somebody who hears us with completely fresh ears and had set themselves with their own challenge of trying to capture us and working with us in a different way and just trying something new. It was nerve-racking for us. Matt is all that we have ever known. He's been our sound, and it juts took a lot of trust and just you know, believing in Joe and ourselves to work with someone else, and just handover our hard work and say, 'we're gonna trust you to do this.'

How did you guys end up choosing to work with Joe?

He has worked with a lot of bands that we really admire, Melvins, Queens of the Stone Age, Clutch, Tool. He's done a lot of records we really admire and we asked a lot of those people how their experience with Joe went and they had nothing but great things to say. He's great at recording drums, but he's really great at recording guitar. He kind of known for his great guitar sounds. He's a guitar player as well. I really felt that it would benefit us to go in and work with someone that is so guitar-based because we are pretty much a guitar band, but then again, I was really happy with my drum sounds probably more so than I have ever been. But that's also a product of me developing and knowing what I want to hear.

Speaking of drums on 'Waving Radiant', how did you approach this record differently for percussion than you did on 'In the Absence of Truth'?

'Absence' was a big stepping-stone for me. I tried a lot of new techniques, explored a lot of new and areas I haven't in the past. It was a lot for me to do. I kinda felt confused about a lot of the things I was doing and directions I was cutting. I think this time I had a lot more of a vocabulary as far as drumming goes, and I had much better understanding of my capabilities and some of the new things I learned. I just tried to have a nice balance of new me vs. the old me in terms of being a drummer

You're self-taught as a drummer right?

Have you ever gone into take lessons or anything like that, or has it always been a self-taught thing?

Right before 'Absence' a friend of mine here in LA that I admire, that is a drummer, and I had some down time and took some lessons. I took four or five lessons and decided it wasn't really for me. Then I took some tabla lessons because I thought that would give me something new to expand my knowledge and my drumming.

I took those for about eight months and I learned a lot in doing that. I don't think I took much drumming technique from that, but it did strengthen my spiritual understanding of rhythm, which is special for me. The Indian approach to rhythm and drumming is much more involved and deep, and I really enjoyed hearing the spiritual approach of drumming, and I really took a lot from that, and I think it made me more confident. Not technically as a drummer. But as a person and I think that reflected a bit.

So has this new outlook on rhythm affected your playing live?

Oh definitely. I'm looking at my drum kit, my playing, and my position as a drummer a lot different now. I guess I look at it as that's my little world back there and I feel much more confident with some of the things I've taken from the eastern approach to drumming.

Where did you pick up the idea to learn the tabla?

I met Aloke Dutta, he was recommended to me by Danny Carey (Tool). He has always had great things to say about Aloke and I met him a few times. Beyond being a great musician he was just a great guy, really funny. I'm really glad I took those lessons from him, he's just all around good, a really good dude. I learned a lot from him.

Isis has always thrown in extra layers and effects to songs that can really only be picked up on headphones or on vinyl. What kind of ear candy can be heard on this album?

Those guys, Erin and Mike, well all those guys are masters at creating textures and weird soundscapes, beyond stuff that we have written we throw stuff either underneath or on top in textures and layers later. Also, in a lot of the mixing samples get tweaked, moved around, to add to the effect I guess. Joe Barresi is such a mystical guy in the mixing. He threw in some really great stuff, did things we haven't heard in writing the songs. It's really valuable to have somebody that can hear that stuff and bring it out and really know what to do with your music.

Over the years, how has the song wiring transformed and changed?

Beyond the oblivious, exploring our more ambient or prettier side, just learning better and more effectively on how to use our strengths, how long you should build things and where the impact should come. We've always been good at writing these big epic endings, or middle parts. We all have to go back and write the beginning on how to get there. I think we have all become stronger as a unit and learned how individually we contribute to the band. Everyone's got their own little style to work together. Everyone has come a long way in terms of being musicians and understanding of the band.

What records or bands made you want to devote your life in making music?

My dad is a drummer; there was a drum kit in our house. He had a really expensive record collection, and it was as tall as I was when I was a kid. Always listening to records, always music. I always had the ability to play drums. It was sort of a calling to always be a musician. I had friends in high school that were always ahead of the curve. Somehow, my friends were hearing about bands like the Melvins, Jesus Lizard and Tar and I was exposed to good music when I was in high school. I started playing out when I was young, in my teens I was playing in Boston, it just really appealed to me.

There was a time when I was thinking of being an athlete rather than a drummer. But I have a really deep passion and feeling about playing music, especially in this band. And I feel I had something to offer, and I'm happy to do it.

Looking back on the long career or Isis, what have been your proudest moments personally?

Being on tour with Tool is pretty high up there. They're a band that I really respected for years. They're one of those bands that people have a large amount of respect for. To be hand picked by them was a really nice feeling. To be able to quit my day job and do this full time and being given 'record of the year' by a few magazines, to be told that we are an influential band and a band that is leading a movement or new genre of music. That's incredible. It's overwhelming to hear that you influence people or help people through bad times. That's more than I ever could've hoped for from this band, and we all very aware and appreciative of that.

Filed Under: isis
Categories: Exclusive, Interviews
Comments
Leave A Comment
Back To Top