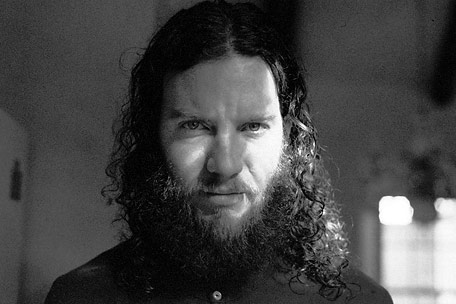 In the '90s, Turner founded Hydra Head records, which has released hallmark albums by everyone from Cave In to Torche and Xasthur. He is also an in-demand musician. Isis, the band he co-founded in 1997, was one of the most influential groups in the post-metal scene before their break up in 2010. Turner has recently released an album called 'Mare Decendrii' with Mammifer, a new project which also features his wife Faith Coloccia.

In this second installment of Hill's interview, we take a look at the musical side of Turner's career.

Before Isis you were a member of Union Suit and Hollowmen. Were they both full-time bands? Are there releases available by these bands?

Unionsuit and Hollomen were both bands that I took seriously at the time I was doing them, but weren't even remotely as productive as Isis were. I was basically just learning how to be in a band, play with others, developing the process of writing songs, playing live... cutting my teeth really. Both were good experiences for me, but ultimately I didn't find my way, so to speak, until Isis really got going a year or two into our existence. As far as the availability of music by the aforementioned bands, I think the Unionsuit 7" is available digitaly from Second Nature Recordings and Hydra Head probably still has a few copies of the Hollowmen 7" lying around.

How did Isis form?

Jeff Caxide and I were roommates in 1997-99 or so and out of that, our friendship, and common musical interests, Isis came into being. I think we both felt unsatisfied with the other bands we were in at the time, either because of the other people involved, or the fact that they just weren't our bands and the musical direction in them wasn't closely aligned with what we wanted to be doing. We both liked a lot of the same bands and wanted to push ourselves a little bit further than we had in our other musical endeavors, so we started looking for other like minded individuals to help complete the puzzle... Though we started the band in '97 it was late in '99 that the final and definitive line up was solidified.

The early releases were on Escape Artist Records. How did that relationship come about?

I knew Gordon Conrad from my relationship with him via Relapse Records. He was working there at the time and had helped me out with a bunch of stuff between Hydra Head and Relapse -- either getting our stuff in their distro or helping to facilitate some of the vinyl licensing stuff we did for a few of their artists. I sent Gordon an Isis demo in the hope that it might be of interest to Relapse. As it turned out the other decision makers at Relapse had no apparent interest in working with us, but as it turned out Gordon told me about a label he was starting at the time (Escape Artist), and mentioned wanting to work with us. Having established trust with him via the working relationship we already had this seemed like a good idea... and as it turned out everything worked out well for all involved.

At what point did Isis sign with Ipecac Records?

I think after a while of working with Escape Artist we felt we wanted to try something else, maybe a label with a slightly broader reach, both artistically and in terms of distribution. In our discussions about what kind of label might be a good fit, Ipecac came up as strong possibility - they put out records for the Melvins, one of the few bands we all loved on a musical level and also looked up to as a model of a well-run band, seemed to have their business shit well in order, were very liberal in terms of the creative control afforded to their artists, and were not a genre-specific label. At the time my friend and collaborator James Plotkin was already working with Ipecac and I asked James to pass along some Isis stuff to Patton as a favor. We really had no expectations, but as it turned out Mike was into our music and after discussing the nature of the arrangement with him and his partner Greg Werckman we decided it was the right move to make. This was one of the best decisions we ever made as a band I think - working with them was a very pleasurable and rewarding experience for Isis, something that helped shape our path.

Probably one of the highest profile tours that Isis did supporting Tool on their 2006 US Tour. How did that come about?

I think Justin Chancellor was the first guy in Tool to take an interest in Isis. We met him at a show of ours shortly after we'd moved to LA and everything sort of developed out of that initial contact. Unlike a lot of bands, I don't think their management ever has a hand in picking their support. In our case as with most or all of their openers, it stemmed from their interest in our music. It was certainly a weird experience to have done a tour that size, but I'm glad to have been able to do so.

Old Man Gloom has been a long standing project for you. There have been a few different people involved. What was the genesis of the project?

Old Man Gloom came out of a love of the absurd, of heavy metal, and an interest to perform exercises in musical immediacy. Basically, Santos Montaño and I wanted to put something together quickly -- something abrasive, impulsive and energetic. I think I also wanted to have an outlet for musical expression that was looser and less narrow than what was going on in Isis. Isis' focus and single mindedness is one of the things that made it successful and that I appreciated about, but I've always wanted to have ways to be really free in creating music, including being really impulsive with compositional decisions and using improv as a means of making songs. When Santos moved to Boston some years after I did we decided to pursue OMG a bit further and expand the line up adding Luke Scarola, Caleb Scofield, and Nate Newton... and from there the mess that is OMG continued to spread out in many directions.

Another project that originated around the inception of Old Man Gloom was House of Low Culture. What was the inspiration of that project?

In some ways what I wanted to do in HOLC was similar to what was going on in Old Man Gloom. I wanted to be free of the constraints of a regular band, to explore sound on my own and with a small group of friends, and step outside the realm of heavy riffing and more linear song structure. It really just started as bedroom experimentation, but after I began to amass material that functioned well beyond just being exercises in sound exploration and decided to shape it into a loosely defined entity of its own. It's something that continues on into the present and which has gained even more significance for me over time. Now that ISIS is no more HOLC is one of the things I've started to devote a lot more of my time to which is something I'm very grateful to be able to do and feel very excited about in terms of the results produced.

You're also quite active with several collaboration such as Grey Machine, Twilight, Lotus Eaters.

All the collaborations I've been involved could be a separate conversation in and of itself... Each project or band has involved different people and group dynamics and my involvement with each has varied greatly. Some were truly collaborative in that each contributor was fairly equal in terms of what they brought to the table (Lotus Eaters, Jodis, Drawing Voices), whereas with Twilight for instance I was really just adding a few ideas here and there to music that was constructed without any input from me. Remaining musically active in a bunch of different contexts is really important to me. I don't want to remain confined to one area of musical exploration, nor do I want to be working with just one group of musicians. There is so much to learn and to explore, and in music I've found that a lot of my growth and inspiration has come through the process of collaboration. Though Isis was my main band for years all these other things have had equal significance for me and I've taken my involvement in each just as seriously.

Mamiffer is an active band. Can you summarize the inception of the band, basic inspiration and vibe?

Mamiffer is and always has been directed and largely constructed by Faith Coloccia, to whom I am married. She basically built it out of ideas she was working on after the dissolution of her previous band Everlovely Lightningheart, and out of a desire to be more creatively autonomous. While working on the first Mamiffer album (before she and I were married or even dating), she asked me to contribute some guitar pieces to a couple of the tracks she was working on, which I did. During the working process our personal relationship developed into something different, and she asked me to join as a more permanent member, to which I again happily agreed. Mamiffer has become what could loosely be described as experimental classical or modern composition, but also includes some elements of ambient music, pop and noise -- once again, a band that is purposely operating outside of strict genre parameters. While I don't contribute much to the song writing process, Mamiffer is my main focus currently besides the work I do in House of Low Culture, of which Faith is now also a member.

I see that there are some Mamiffer 2011 tour dates. What are the details surrounding that?

Our new record 'Mare Decendrii' was just released a few weeks back and we wanted to do some shows to support it. Sunno))) generously gave us an invitation to perform on the day they're curating for this year's Roadburn fest, so we sort of built the tour around that. We're also planning some US dates around the Utech Records fest in June and a collaborative recording with Locrian which will be taking place around the same time.

So what is the lowdown on the new Mamiffer album?

SIGE, is that a newly formed record label?

Faith and I started SIGE together as an outlet for projects we are directly involved in. We feel that in many circumstances artists lose control of and perspective on the albums they release, and the SIGE was created in part to avoid this problem. We also both enjoy the process of making records from recording to design, all the way down to hand assembly. To have a label that operates in a more intimate a creatively focused way is a very gratifying and important endeavor for both of us.

Will it be available through normal distribution? Last year, while we were on tour together we discussed different ways of getting music out; will this be an extension of those concepts?

The Mamiffer record is available in the US through SIGE directly, as well as through our distributor Thrill Jockey. Though we do have distribution, many of our sales and contacts are direct with the people ordering the records or through other small outlets of a similar mindset and aesthetic as ours - places like Conspiracy Records, Aquarius Records, Utech, etc. Faith and I both come a from a background in the '90s underground where direct contact with the labels and bands we liked was a very exciting and inspiring part of our involvement in music, and in a way SIGE and the way we operate is in keeping with this spirit and mindset.