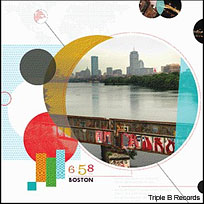 Worcester, Mass.' own hardcore princes Bane return with a new seven-inch, and with it comes a few surprises by way of the cover art. The release actually has different names and is being released from different labels in different areas worldwide. It's rare that album art could directly influence a release's title, but here is one such example.

The basic idea was that the release would see different versions, each with a photograph of a different city's skyline on the cover. The photographs were taken at the same 'actual time,' but ultimately at different times due to the varying time zones.

The result is a photograph taken at different times of the day and thus a different album title. For example, one is titled 'Tokyo 7:58,' and another is 'Los Angeles 3:58.' There are seven different versions in all, with covers sporting photos of Boston, Dublin, Los Angeles, Rome, Tokyo, Perth, Australia and Curitiba, Brazil.

Bane have shows scheduled in Massachusetts, South Carolina and Florida to support the release.

Filed Under: bane
Categories: News
Comments
Leave A Comment
Back To Top