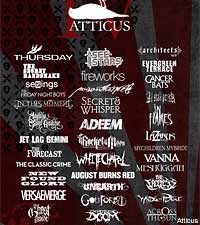 Nowadays, sponsorships by clothing brands and energy drinks are all the rage. For Atticus, though, it's about the lifestyle and sticking with it. When it came to sponsoring metal bands and tours -- not to mention putting out compilation samplers -- Atticus wasn't afraid to branch out into the unknown, since it was primarily a punk rock brand.

"When I was deciding to do a metal tour, I thought, 'I don't know how this will fly,'" Atticus U.S. Marketing and Artist Relations rep Mark Bubb told Noisecreep. "This isn't known as a metal brand. Sponsoring is one thing, but putting on a tour is another. But the first tour sold out 95 percent of the venues!" It was clear that the brand's venture into the metal world was starting out as a successful one.

"We never shied away from crossing over," Bubb said. "Six years ago, we had Bane and 3 Inches of Blood on a comp. It's a fact that the brand stayed relevant and it stayed with relevant artists and didn't jump ship on artists. It was all about loyalty, sticking with bands and helping them out, like we are another member of their team."

The company has released a few compilation CDs over the year. Last year's version was sold in every Hot Topic. This year's version, out in April, will only be available at Atticus tours and the Warped Tour as a special edition package.

"Putting together the Atticus compilations each year is one of my favorite things, because I get to ignore all the hype, politics and other bulls--- and put together something I believe is truly great, based purely on the music. Atticus V may be my best work yet," Bubb hinted.