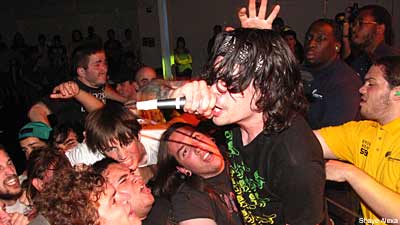 If you had a dime for every time a hardcore band sang about unity, you'd be picking up change in the pit long after the show ended. But as much of a lyrical cliche as that is, the sense of togetherness the genre inspires was in full force at the New York City stop of the 10 for $10 Tour last week. The tour, headlined by Madball, Poison the Well and Terror, is true to its name, featuring 10 hardcore bands for the low price of only $10.

Calling the first two days of the show "perfect," Terror vocalist Scott Vogel told Noisecreep that playing with Madball in their home of NYC was an early highlight. "We had a blast on stage and also just hanging out and seeing a lot of friends," he added. While there have been many one-off hardcore shows, the genre hasn't had its own touring show in recent memory. And if the seeds of the tour were planted years ago during countless Sunday afternoon matinees at CBGBs, the idea of a multi-band hardcore show for a low price has a newfound relevancy during a recession. 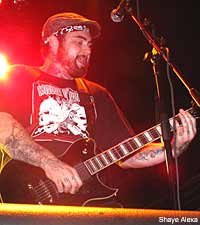 For the 1,000 or so that gradually filled up New York's Terminal 5 for the second show of the tour, it was a great showcase of not only hardcore's past and present, as represented by the three headliners, but also its future. And the bands all seemed as excited about the tour as their audiences.

"Being a part of this tour for the last five days, I've really got to see the vision come to life," Trapped Under Ice vocalist Justice Tripp commented via e-mail. "In the beginning we didn't know what to expect, but the response so far has been great, and I think people appeciate the reasons behind the 10 for $10 Tour. We look forward to the next month on the road."

"Being on tour with Poison the Well, Madball, Crime in Stereo and Trapped Under Ice is amazing," The Ghost Inside drummer KC told Noisecreep. "It's a lot of bands that have kept hardcore going, and bands that are up and comers doing something to keep it going." If the New York show was any indication of how the rest of the tour is going to go, hardcore might have its own, scrappier version of the Ozzfest. 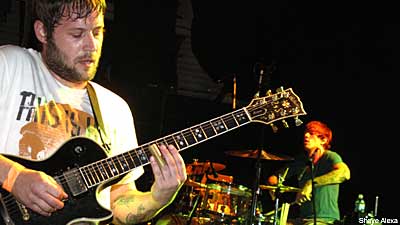