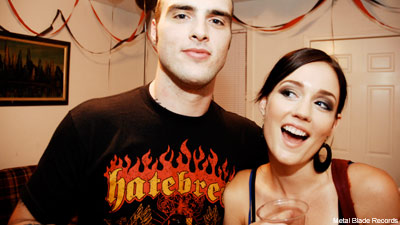 After 10 years of knowing each other -- and half of those spent dating -- Evergreen Terrace guitarist Josh James and journalist/photographer Maggie Day are now officially betrothed. James elected to share the tense story about popping the question with Noisecreep.

"Jan. 9 was Maggie's 26th birthday, and on her birthday, one of her best childhood friends killed himself," James revealed. "Two days later, her grandmother died in Maggie's room under hospice care. She was more of a mother figure to Maggie than a grandmother figure. I can't really explain how upset Maggie was, and still is. The rest of the week was extremely hectic, confusing and trying."

On the Saturday after these tragedies, ET played their 10th anniversary show at Jack Rabbits in Jacksonville, Fla. James had planned the proposal over a four-month period and chose the anniversary show for serendipitous reasons, since it had special meaning to him. The pair also began their relationship after a Jack Rabbits show. "It was a celebration of the last 10 years of my career, as well as Stretch Arm Strong's final show. They are a band that I grew up on and had a big influence on me," he said.

Given the circumstances, James wasn't sure Maggie would have the mental or physical wherewithal to go to the show. James picked her up her house, talked to her dad, asked for his blessing and James said, "He seemed pretty stoked and said he would love for me to ask her. I left him a ticket to the show, but he didn't come! Ha!" 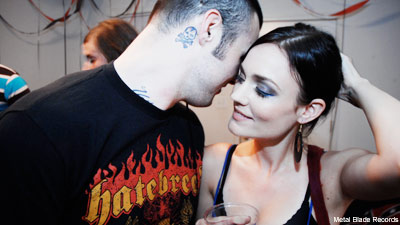 There was a snafu, though. During Bane's set, Maggie got sick. "She asked if I could take her somewhere to throw up," James said. "The security guard wouldn't let us out of the back door, but then saw that Maggie was about the spew, so he let us out in fear that he was going to get puked on." They went to a restaurant where she spent 40 minutes vomiting, while James ate soup.

He wasn't bummed about missing the opening acts, since he had other concerns besides Maggie's sickness. "I was starting to get worried that we wouldn't make it back in time for the planned proposal," he said. "I told her it was no big deal, but if possible, I would like her to watch me sing with Stretch Arm Strong. I was texting the guys in the band, letting them know that the proposal might not happen due to her sickness."

Once back at the sold-out club, James made it to the stage just in time to sing with SAS. After he was done, he brought Maggie on stage to pop the question. "I think she was pretty embarrassed since she has major stage fright," James said. "She didn't even know which hand to give me!" Afterwords, while Strech Arm Strong played a cover of Modern English's 'Melt With You,' the newly-engaged couple enjoyed "a great ending to a terrible time."

Put down that Kleenex and peep the actual proposal. And those interested in the ring: It's from 'Natural Born Killers,' one of their favorite films.