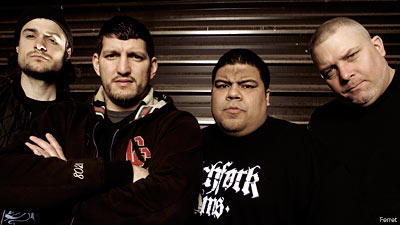 Nothing should prevent heavy music fans from attending the "10 for $10" Hardcore Tour this summer, which kicks off tomorrow in the city of Brotherly Love. (That's Philadelphia, Pa., if you didn't know!) While the buck-per-band concept may be appealing, fans shouldn't let the term "hardcore" throw them off. Throw genres, categorizations and labels out the window, since the tour is more about an ethos than a particular sound.

"'10 for $10' is the hardcore tour for this summer and probably the year," Madball singer Freddy Cricien told Noisecreep while he was working in the studio. "It's a traveling fest of quality bands for 10 bucks. Who wouldn't want to come and experience it?! Every band on the bill is not traditionally a 'hardcore' band, but the concept, approach and many of the participants are as hardcore as it gets!"

The mighty Madball will appear alongside Poison the Well, Terror, Bane, Vision of Disorder, This is Hell, Vision, Death Before Dishonor, Crime in Stereo, Trapper Under Ice, The Ghost Inside and the Mongoloid, which makes for an eclectic evening reminiscent of those classic, HxCx matinees of yore. It'll be the best, most effective bills you spend all summer. The tour will criss-cross the US and Canada and runs through August 14 in Buffalo, N.Y.