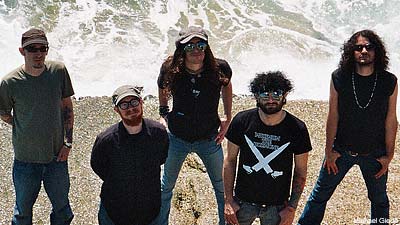 The term 'noise' gets thrown around to describe plenty of bands these days, and to much dismay, a good majority of these tagged bands are not fans of the title. "I don't think it's a good word," singer Eddie Gieda of An Albatross told Noisecreep. "I think it's a post-postmodern term that get's thrown around for lack of better description, or in a real lazy way."

Gieda sees the whole use of the term as a cheap and rather uncreative way to describe music of a discordant nature that more often than not uses non-traditional structure. "People like to piggy back something to either sell records or dissuade someone from listening to it. There is a lot of power in the way people choose to slim down the descriptions of bands, music and art pieces," says Gieda.

"It's a term applied in a hindsight sort of way," Gieda explained, possibly thinking of how the genre didn't exist until recently. "I think the whole idea of the noise label that is being applied to a form of music that no one that was ever making it said, 'We're gonna start a noise band.' I don't think that Melt Banana or Lighting Bolt ever said that."

Most people think of music that's loud for the sake of loud when they hear the brash term, but truthfully most bands deemed as noise create very complex and almost classically-orchestrated music, but with modern devices creating modern stress in sounds. For An Albatross, they should be free from being called noise due to their beautiful yet destructive 2008 released album 'The An Albatross Family Album'.

In the past, the band spent no more than two days recording an album. But with the largest budget they'd seen to date, they decided to make "a record we always wanted to make," Gieda revealed. The band brought in every friend and fellow musician they could find to add to the already solid layers of songs, and in the case of the album's closer, '3,000 Light Years by Way of the Spacehawk,' the new layers added more guitars aided by string sections, synthesizers and horns.

"It became a different animal in the studio with mixing it, layering it and coming up with ideas," Gieda gushed on his favorite track off the album. "We didn't know where some of those songs were gonna go, and they became very different from how they were intended, which was great. I would be absent from the studio for a day, and I come back and there would be this whole new layer. It was radical."

Though a live rendition of this song would tear any club down, Gieda thinks that day will never come. "Unless we have 15 guitarist on stage, it's really difficult to do that song justice."

An Albatross Tour Dates
on TourTracker.com