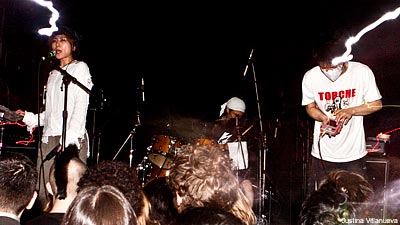 Melt Banana make spazzy punk for people who enjoy psychedelics. When they played Bowery Ballroom Nov. 23, they started their set noisy and dark. The band left us literally in the dark. The only luminance came from the flashlights attached to headbands frontwoman Yasuko Onuki and guitarist Ichirou Agata wore on their heads.

Oh, and in this version of Melt Banana, Agata didn't have a guitar over his shoulder. Instead, he and Onuki operated synthesizers. But, this dim situation -- dubbed as Melt Banana Lite -- didn't stop a mosh pit from forming.

When the bright and colorful stage lights came on about 20 minutes later, clouds of smoke came from various directions. Some people decided to light their own materials in celebration of the Japanese band's return to New York City. This time, bassist Rika Hamamoto joined the trio on stage and Agata worked his strings. While there was not too much of a difference between the Lite and non-Lite sets, nobody could complain that the Melt Banana energy was lacking.

"How are you?" Onuki asked before politely answering a fan, "Good. I'm fine, too." Afterwords, Onuki exhausted a couple of cat sounds, "meow, meow, meow."

And just like that, the vibrant Melt Banana was back at work and fans were back at moving. There was a whole lot of moving, even when the band wasn't making as much noise. In fact, a guy successfully crowd surfed throughout a lengthy drum solo.