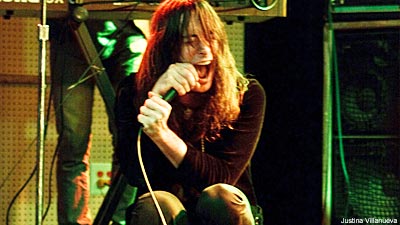 "Are the vocals loud enough?" producer and musician Wharton Tiers -- whose roster includes An Albatross, Sonic Youth, Dinosaur Jr. and Helmet -- asked the Knitting Factory crowd on Jan. 31. He was being funny. The ensemble consisted of eight people, but not one person made a peep with their mouths (I guess the saxophonist did, but you catch the drift).

"Hey, turn the vocals up!" someone from the crowd shouted after they finished playing. Even though the joke was over, the 'late to the party' irony gave me a chuckle, as did the eclectic lineup for the show. With Marc Edwards/Weasel Walter Group opening the show, Wharton Tiers Ensemble was followed by Rice and then An Albatross.

After someone asked Hudak how'd he get the parasites he said, "I ate some bad food in Bangkok."

I couldn't tell if they were performing a live sample, acting out a skit they thought up in the van on their way to the show or if Hudak had actual stomach pains. Either way, I was really happy I was able to make it to the bizarre show. While I'm more familiar with the grindcore-rooted sound of An Albatross, the band has inherited an incredibly psychedelic vibe that surpasses anything that might have put them in the 'weirdo' category before.

"We're gonna do a few more. Just a few more. Thank you for your attention," frontman Gieda said. I don't know how he wasn't out of breath with all his David Yow-ish moves.

If you are into the Locust, Melt Banana and/or Daughters, check out An Albatross' latest work -- a limited-edition, vinyl-only release called 'London:Live.' It's available via their Web store only. Also check out 2008's 'The An Albatross Family Album' which was put out by Eyeball Records.