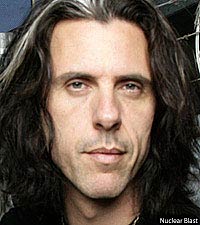 Alex Skolnick of Testament admits that Michael Jackson didn't replace Judas Priest in his tape deck, but the 'King of Pop' still had a profound effect on the shredder.

"When 'Thriller' came out in 1983, MJ had been someone my peers and I mistakenly thought of as a 'disco' artist," Skolnick told Noisecreep. "There was no way you could get me to listen to one of his albums. But leave it to Michael Jackson to achieve the impossible. For the song "Beat It," he and producer Quincy Jones brought in Eddie Van Halen, who was my favorite guitarist and arguably the most influential hard rock guitarist of all time. By doing so, they made a statement that hard rock and R&B could go together, forever altering the course of pop music. They also got legions of stubborn teenage male rock fans like myself to pay attention to Michael Jackson. Suddenly, his earlier work, such as the 'Off The Wall' album, started to resonate with me. Was it going to replace Ozzy and Judas Priest in my cassette deck? No. But was it worth putting on once in a while? Absolutely. Besides, girls liked it."

Michael Jackson died Thursday at the age of 50.