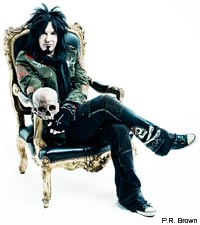 "I think that personal relationship between the host, music and the listener is sacred," Mötley Crüe bassist Nikki Sixx told Noisecreep.

In a lot of ways, Sixx has done it all: played bass for a major rock band, created both a fashion line and a charity and written a bestseller. Today, Sixx adds to his creative legacy with the debut of 'Sixx Sense', a nationally-syndicated Monday through Friday radio show. Along with co-host Kerri Kasem, Sixx will talk to celebs and other interesting folk while discussing some of his favorite bands.

"It's out-of-control exciting!" says Sixx. "It reminds me of when Mötley really started to take off and we were just bubbling under. All the hip people knew about it and then it started to sort of cross. Feeling that little bubbling moment is really magical with the show."

'Sixx Sense' will have both an interactive and visual component as well. The show's official website will allow fans to communicate with Sixx and Kasem. The bassist has also decked out the studio rock star style with red walls and leopard print carpet.

While Mötley is on hiatus from extensive touring, the band is booked for a few European festivals this summer. Sixx says fans can expect him on the air, no matter what. Just don't expect him to interview his guests.

"I don't want to interview anybody," he said.I" just want to have conversations. That to me is the key to doing the show and making it feel comfortable. I had a great conversation with Rabbi Shmuley last week and the mics were on. We just talked and talked and talked about his outlook on life and his experiences; for example the Michael Jackson book that he wrote, ['The Michael Jackson Tapes'], and how that came to be. We were just talking and it's on tape and it's magical. That's kind of my dream whether it's [David] Bowie or friends of mine from other bands -- it's just open ended."

While Sixx admits the there is not set roster of guests lined up for debut week, "It's an ongoing, fluctuating moving monster," expect top talent from across many fields. And above all else, Sixx wants to use his show to introduce fans to new bands.

"Whether it's a brand new band like Cage the Elephant or Sick Puppies or Smash Kings out of Los Angeles or guys like Paul McCartney and Bono and [Bob] Dylan or Ozzy [Osbourne] and talk show hosts like George Lopez. To me, there's something very interesting about human nature in general and to find that one thing that makes them somehow click with society. I think there's gonna be some really great conversations and in the midst of all that, of course the most important thing is the music," Sixx said.