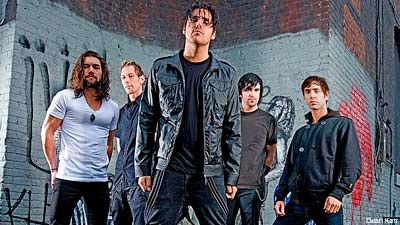 Jason Evigan is living the hard rock dream these days. His band, After Midnight Project, is signed to Universal Motown, their debut album recently hit stores, and they've been touring the country with Papa Roach. The singer's father is actor Greg Evigan, who found success in the television shows 'BJ and the Bear' and 'My Two Dads,' so he's no stranger to the world of entertainment. But unlike many other celebrity offspring, Jason's work ethic knows no bounds. He tirelessly pounded the pavement and got the word out about After Midnight Project through countless local shows and self-booked tours.

The hard work paid off when A&R agent Shep Goodman signed the band to Universal Motown and producer John Feldmann (the Used, Atreyu) jumped onboard to produce 'Let's Build Something to Break,' AMP's debut album. Noisecreep spoke with Evigan about growing up in a celebrity household, working with Feldmann, and the inspiration behind their song 'Hollywood.'

Jason, your father is an actor, so did you inherit the artistic bug from an early age?

I guess you can say that. I was obsessed with Michael Jackson and his epic 'Making of Thriller' music video. My mom tells me I would watch it 50 times a day while dancing and singing along. My dad was always writing and playing music with his friends around the house so I would always watch and try to kick it with them. Someone gave my dad Elvis Presley's cherry sunburst Fender Jaguar years ago. He kept it in a case in a closet kind of hidden away. I would always sneak in and mess around and try and teach myself little things. I had no idea what I was doing but it felt so good to just strum away in that dark closet.

How supportive was he of your pursuit for all of this?

My dad was always great about supporting me and my future dreams, whether it was being a hockey player, ninja turtle, musician or whatever. He pushed me to pick up the guitar when I was 8 years old. I think he saw the dark road I was heading down, with my baggy Jnco jeans and only listening to Dr. Dre, Ice Cube, and Eazy-E. By the time I was 13 years old, I had my own band and we were booking gigs at The Whisky and other various clubs and parties in L.A. My dad would drive us and the gear to every show in his motor home which we called the Brougham. He would also let us take over his garage for band practice and when we grew out of the garage we moved upstairs to his old work out room which was connected to his home studio. He recorded our first demos. So 13 years later when he looks at me and says he's proud of me as a son and a songwriter it chokes me up a bit because I owe a lot of it to him and my beautiful mother.

After Midnight Project has been a fixture of the Los Angeles club scene for years before you landed a deal with Universal Motown. Was there ever a point where you didn't think things would happen for the band?

I never had a single doubt that we would do something big. There was a point when I didn't think we were going to get signed though. That's when I put together a 20-page marketing plan of how we were going to make it on our own. We were ready to go and a few days later we got a call from Universal. I should sell that plan to an up and coming band. There were some decent ideas in there (laughter).

Since signing to the label, has there been any conflict with anything on the artistic side of things?

Surprisingly no! We got to work with the producer of our choice. We picked the songs we wanted. I was able to design the front cover of the record and they actually chose my treatment for our first music video. Motown is amazing and they really let AMP be AMP.

You worked with John Feldman on 'Let's Build Something to Break' and he's had a reputation of being a perfectionist in the studio. Was he a slave driver during the recording?

Well, I think John would agree with me that the band and I are just as much perfectionists as he is. Many nights he would come in at 3 AM while I was still tweaking out on some f---ed up crazy low-fi loop in Pro Tools. John did however push us creatively and really helped us with structure and vibe. He got great takes by pushing and pushing. He kept me going by feeding me mochi and thai ice tea.

How did you hook up with him?

I'm still confused on how we finally ended up working together. I know when I first started AMP I wanted him to do our first record. I had friends who supposedly knew him get him our EP. I gave him an EP at one of his Goldfinger shows and I'm pretty sure I sent an EP to his house. I never heard anything back from him though. Five years later when we were looking for a producer to record the album and he wanted it the most. We showcased for him at Swinghouse studios in Hollywood. He understood the songs and really just got me as a songwriter.

The record sounds huge and there are a lot of atmospherics throughout. Did you ever scale down on ideas because you would be worried that you wouldn't be able to pull it off live?

We never scale down for the live show's sake. We figure anything we can do in the studio we can pull off in our live set. I think limiting yourself in studio can be dangerous because evolving as a band starts in the studio usually. We did however scale down some of the craziness just because we wanted to still be looked at as a rock band. I think we managed to do a decent job of still being a rock band but also having some elements that will separate this album from the rest of the pack. Well, at least I hope.

From listening to your song 'Hollywood,' it seems like you aren't a huge fan of the city. What bothers you the most about it there?

For the most part I actually feel grateful that I grew up in Hollywood. I can appreciate Los Angeles for what it is and I love California as a whole. It's a beautiful place. I do have some beef with the plastic, fake wannabes that lurk around. The people who come to Hollywood and think it should be a certain way, so they end up living that way and polluting the streets and the industry with there grossness. It's a weird city. It's not fast paced like New York, it's a bit more laid back, but it's very easy to get lost in the glam and idea of Hollywood. It can eat you up quick. Writing that song was really good for me though. It helped me see that my desperation was getting the best of me. It was like a great therapy session that was recorded and I can keep going back to when I need a reminder.