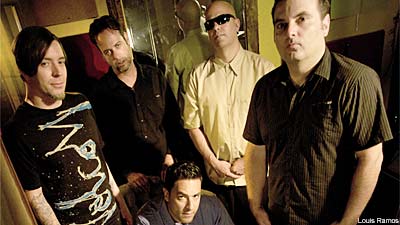 Strung Out are celebrating their 20th year together, but they still have more fans in the punk and hardcore world than they do in the metal community. That doesn't mean their high-energy hybrid of both genres doesn't deserve the Noisecreep seal of approval. Quite the contrary. Their upcoming album, 'Agents of the Underground,' should appeal to fans of Bad Religion and Anthrax alike.

We spoke with axe-slinger Jake Kiley and got his take on the Ozzy Osbourne guitarist situation and his life as a metalhead.

You guys covered 'Bark at the Moon' a few years ago. It looks like Zakk Wylde is out of the guitar slot in Ozzy Osbourne's band, and Gus G. of Firewind is in now. Who do you think would have been a nice fit for Ozzy's band?

I didn't know Zakk was out! That is the first I've heard about it. I'll try out (laughter)! Just kidding but that is a dream gig for a guitarist. Let's see ... Eddie Van Halen? How about Alexi from Children of Bodom? Yngwie Malmsteen would be an interesting choice. Randy Rhodes is one of my heroes, so whoever gets the job better be good, because Ozzy's had some great players.

I'm a big fan of the Jake E. Lee era myself.

Dude! Me too! I think he's really underrated. The Badlands stuff is amazing, too. That first riff on the first album is so good!

Was metal your first musical love?

The first cassette tape I ever bought was Michael Jackson's 'Thriller.' I also remember hearing the guitar solo in Prince's 'Let's Go Crazy' and being hooked. I heard it and I was like, "WTF! I need to do that!" But it was Def Leppard that made me want to learn how to play guitar. They also got me into Jackson guitars, which I still use to this day.

In terms of heavier metal, I was a Bay Area thrash freak. I loved bands like Testament and all of that but I never got into the lyrics. I was more in it for the music and arrangements.

I did, but something about the vocals got a bit annoying sometimes. But yes, I dug them too. Robb Flynn is such a great player.

I absolutely love Scar Symmetry. They are killer songwriters and players. The singer is great! They are like a mix of Journey and Napalm Death (laughter). I'm totally cool with that!

Did you hear that he left the band, and they've since replaced him with two singers?

No way! That sucks! I don't know if I like that idea. It's too bad, because that last album is so good. I also have been listening to Gojira from France. People should also check out Protest The Hero from Canada.

Strung Out Tour Dates
on TourTracker.com