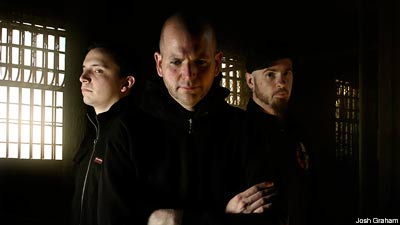 Established engineer and producer Joel Hamilton has an impressive resume that includes work with Elvis Costello, Tom Waits and Justin Timberlake. And he's one of the lead songwriters for the experimental avant-rock collective The Book of Knots. Despite his mainstream activities, he also plays a key role in A Storm of Light.

"Joel and I worked together in the band Battle of Mice," says A Storm of Light frontman Josh Graham. "He's become sort of our fourth member and he and I basically co-produced our new record 'Forgive Us Our Trespasses.' I love what he brings to the table, and I know he's going to be able to do that in the studio setting."

When Graham says Hamilton is "sort of our fourth member," he doesn't mean it the way bands often speak of famous producers who help shape their sound, then move on to other projects.

"I asked him if he wanted to be a band member," Graham says. "But not to play with us live. [I wanted him to be] more of an obvious non-touring bandmember, and he was super into it. So he produced and arranged a lot of the vocals and string parts and my vocal parts."

A Storm of Light started writing 'Forgive Us Our Trespasses' last October after Neurosis got off tour; Graham creates their video production and tours with them. By December, the songs were mapped out and A Storm of Light entered the studio in January.

"We did drums and mixing at Studio G in Williamsburg, [in Brooklyn] and we did the guitars, bass and the majority of the vocals and Joel's other studio Strangeweather studios, which is more in Bed-Stuy, [Brooklyn]," Graham says. "I had the keyboards in my house and we did the vocals over three days in January and guitars, bass and cello over three days in February. Then we did the drums in early March, and we mixed the record over eight days at the end of March."

While the approach seems pretty methodical, the songs on 'Forgive Us Our Trespass' don't sound like they were created on the clock. The music is timeless, transcendent and heavily informed by Graham's prolific film work.

"To me all the song structures need to tell a story," he explains. "They can still fit within a chorus, verse format, but the way everything is orchestrated or put together definitely needs to build and have a peaking moment and sometimes come back down. Always, for me, the music and visuals flows together synonymously."

Download A Storm of Light Songs
Filed Under: A Storm of LIght, AStormOfLight, battle of mice, BattleOfMice
Categories: Interviews
Comments
Leave A Comment
Back To Top