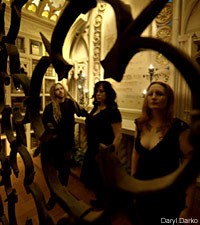 Hailing from San Francisco, the music of Worm Ouroboros is not unlike the music of Norwegian black metal bands. If you close your eyes while listening to it, it kind of takes you somewhere -- specifically to the forest.

But unlike the frozen forests of Scandinavia where Norse gods wreak havoc, the forest Worm Ouroborus conjure is much more peaceful and inviting. Clean vocals and guitars meld seamlessly with carefully constructed doom-laden riffs. So where do Worm Ouroboros find their inspiration while living in a metropolis like San Francisco?

"The San Francisco Bay Area actually has quite a wide variety of preserved open spaces within close proximity to the city," guitarist/vocalist Jessica Way told Noisecreep. "Wetlands, redwoods, oaks, madrone, chaparral, ocean bluffs ... there is plenty to draw from. The East Bay Regional Park District is the largest of its kind in the nation. The three of us are avid hikers and spend what free time we have doing so in the woods or watching birds on the estuary. It's truly a beautiful place. I grew up here, in Oakland, not a place that typically conjures peaceful images, down the street from a redwood forest where I would sit and read next to a creek. Sure, San Francisco is a bustling metropolis, Oakland is ridden with crime, but these concrete environs are offset by natural beauty. It's a place of contradictions. We surely find our inspiration in nature. I think we also find inspiration in contrast."

"I grew up in the woods on a subsistence farm in Oregon, and between the farm animals and the natural wildlife I developed a love for all things non-human," Bassist/vocalist Lorraine Rath added. "The animals were literally my friends, and the woods my playground. Perhaps ironically, being such a nature-lover, I can't imagine a more spectacularly inspiring place to be than the heavily populated [Bay Area]. Thousands of miles of trails to explore -- all public and protected land -- is a veritable Eden. The variety and the starkly beautiful contrasts that Jessica mentions is endless fodder for our creative process. In contrast, try taking a nature walk outside your own fenced property in Southern Oregon, and the only thing you're likely to encounter is the business end of a shotgun. No joke."

Whether it be the city itself or what lies on the outskirts, the Bay Area has influenced a long line of bands who, like Worm Ouroboros, have eschewed trends and earned acclaim doing it their way.

"The Bay Area has always been home to a wide variety of cultures and scenes, musical or otherwise," Way explained. "It's also a refuge to people who felt they didn't fit in their hometown. I know very few people who, like me, grew up here. There's a different attitude here, and I think San Francisco attracts people with a certain mindset that makes them more open and receptive to different things. That's of course a gross generalization, but in a broad sense it's true. There are a lot of musicians here who are less interested in reinforcing an established genre or image than they are in finding their own sound."

The debut album from Worm Ouroboros is now available from Profound Lore.