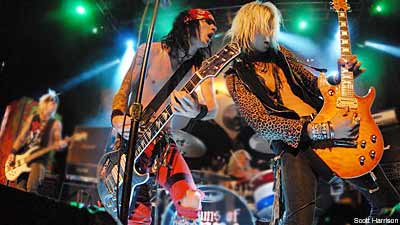 Swedish glam metallers Vains of Jenna are back in the U.S., gearing up to promote the still untitled follow-up to their 2006 debut, 'Lit Up/Let Down.'

Currently signed to Bam Margera's Filthy Note label, the Vains of Jenna boys are able to promote their work with great flexibility. They can stay with Bam or jump to new digs – no questions asked. While band business is being sorted, Vains of Jenna took to iTunes to release a new single called 'Get It On.'

"[It's an] awesome song ... a lot of fun to record," says guitarist Nicki Kin of 'Get It On.' "Lizzy [DeVine, vocals] wrote the main riff like two years before we started to actually record it, so it was one of those songs that was just laying around."

Listen to 'Get It On'

'Get It On' is straight up rock 'n' roll. There's nothing over-the-top happening here except that the band sounds very mature and perhaps even a little road worn after non-stop gigging for more than two years. It seems being flat broke and playing show after show has unified the band, now one in their quest for rock music domination.

Download 'Get It On'
Filed Under: Vains of Jenna, VainsOfJenna
Categories: Exclusive
Comments
Leave A Comment
Back To Top