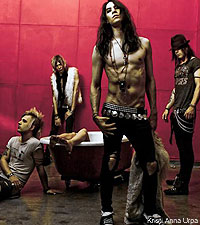 Just a few days ago, we told you that original Vains of Jenna frontman Lizzy DeVine had left the Swedish band. Now, the remaining band members are making headlines again by announcing a new singer just ten days after DeVine's departure. California resident Jesse Forte will now front the band.

"We first saw Jesse in 2009 when his band opened for us at the Cat Club, and he blew us away," Vains of Jenna co-founder and bassist J.P. White said via press statement. "Jesse is unique for sure. Imagine Steven Tyler's charisma, Chris Cornell's powerful voice, a charming smile; then mix it all in a blender with a pair of nunchakus, and you get Jesse Forte."

The band's Myspace profile now features a recording of Forte on vocals with the rest of the band. Vains of Jenna have several shows booked in Europe during April and May.