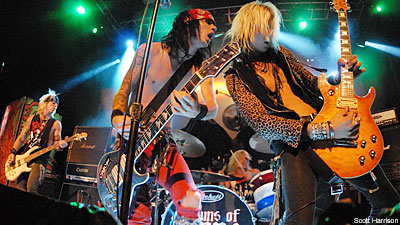 Is there ever a better reason to go to Scandinavia than to hit the Sweden Rock Festival (ok, and the original Ikea)? Sweden Rock is one of the big boys. Around since 1992, the festival attracts top rock talent – and fans – from every corner of the globe. Sweden Rock is one of the earlier European fests, this year happening June 3-6 in Norje Havsbad. More than 70 bands will perform over four days on five open air stages and one tent stage.

Right now, Sweden is in the middle of a glam resurgence. Bands like Vains of Jenna (above), Crucified Barbara and Babylon Bombs have a throwback 80s Sunset Strip vibe – and all three will play Sweden Rock 2009.

"We are all very excited to play this year's Sweden Rock Festival," says drummer Jacki Stone of Vains of Jenna. "This is the first time the band is gonna play a festival this size in Europe and it feels great to be doing it in Sweden! We will be playing new, fresh songs from our upcoming album. These songs kick major ass and will definitely show everyone a new side of Vains of Jenna!"

If you must sleep, just camp. Nearly everyone camps at Sweden Rock and the experience adds to the weekend. Camping will be a little different this year, as promoters have selected a new area to bed the raucous metallers. A festival bracelet (ticket) is required to camp. Shuttle buses will move attendees from the festival grounds to the camping area.