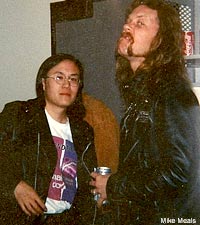 Ümlaut was a Bay Area zine that was launched in the early '90s before founder Brian Lew -- pictured here with Metallica's James Hetfield -- put it to bed in 1995. It covered everyone from Sonic Youth to Slayer. Now, Lew has effectively documented the '80s metal scene, piling tons of artifacts, info, reviews, flyers, photos, set lists, used tickets and other assorted things from a metallic era gone by online with the. It's almost like the Ümlaut blog is an online museum from a thrash scene's heyday!

"The Metal roots of Ümlaut date back to the early '80s, when I wrote for Ron Quintana's legendary Metal Mania fanzine in San Francisco," Lew told Noisecreep. "Then I published a metal zine with my buddy Sam Kress called Whiplash, while Ümlaut was a pop culture and music zine I did in the early '90s."

The blog has been living in cyberspace for five years, and Lew admits he mainly uses it "to write in order to keep my mind sharp and to have fun. And while it tends to be mostly about metal, I rant about other things as well."

The 'metal museum' element of the blog was a happy accident. "Old metal friends and I shared war stories via e-mail," Lew revealed. "I started posting them because they were too much fun and legendary, like Slayer touring with Kerry's 17-foot snake in 1985. Old punk stories are a dime a dozen, but old metal stories are way better."

So what is Lew's numero uno metal memory? (Remember, this is coming from a guy who has a postcard from Lars Ulrich on his site that's signed off 'Drink and Destroy!') Lew said, "My favorite memory is having been friends with [late Metallica bassit] Cliff Burton and [late Exodus frontman] Paul Baloff. Both of them were exactly how people think they were: completely genuine and they didn't give a f--- about what other people thought. But they would give you a beer from their stash in a heartbeat. Plus, their bands changed my life."

This online collection is so nostalgic it could make a crotchety metalhead feel old, but for Lew, it's a labor of love and one that brings a smile across his mug! "It makes me feel lucky to have been in the right place at the right time to meet certain bands when we were all just pimply-faced kids," Lew said "My favorite 'souvenirs' from [back in the day] are the records I was thanked on, especially 'Kill 'Em All,' 'Ride the Lightning,' 'Bonded by Blood,' 'Haunting the Chapel' and 'Killing Is My Business ... and Business Is Good.'"

That's a jaw-dropping, heart-stopping, poop stain-making list of records to be thanked in! We're definitely a lot jealous. We're also pleased to hear that Brian Lew hasn't devolved into being cynical, bitter or jaded through the years. But no, he still loves metal. "I still live in the San Francisco Bay area," he said. "I still listen to metal, but tend to like the more underground stuff. Current favorites are Landmine Marathon, Black Cobra and Ludicra."