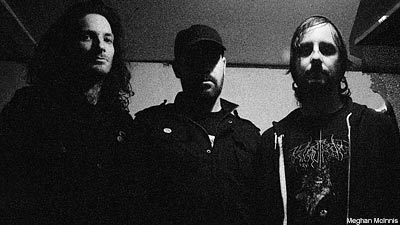 Trap Them have made the transition from uber-cred, micro-indie label Deathwish, Inc. to the bigger pastures of Prosthetic Records. So congratulations to the New Hampshire noiseniks, whose music is fast, furious and a little bit grimy -- as it's decidedly influenced by hardcore and punk, as well as dirty metal bands -- for making like The Jeffersons and movin' on up to the next level.

"We're excited to have the opportunity to work with a label as diverse as Prosthetic. It's the type of label that is willing to extend as much support to their bands as they possibly can," vocalist Ryan McKenney told Noisecreep about the band's new label home. "We had been talking with them for a very long time, and at first it was more geared in a direction of mutual admiration. As time went on and we were starting to open ourselves to different options with this band's future, Prosthetic was still interested. After quite a few talks, it made the most sense to work with a group of people that always remained interested in what we do." Mutual respect is certainly the bedrock of a successful label-band relationship!

For the near future, we can expect Trap Them to "end up touring relentlessly and that the next record we do will be very heavy and pissed off. We're good like that. But, as far as any other details, isn't it better to take the 'less is more' route and treat it all as a birthday gift and just see what you get?" McKenney said.

We prefer to have details about the album to be more like Christmas Eve, where you get one present as a consolation prize to tide you over for the gift fest that is Christmas Day. But McKenney wasn't having any of it, despite repeated poking and prodding. "Thanks for listening, Noisecreep. You're a good friend. Or maybe I'm just a good bulls---ter," he said.

Trap Them Tour Dates
on TourTracker.com