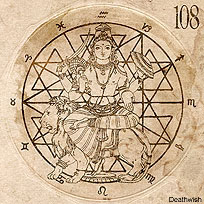 Old-school New York Hare Krishna hardcore band 108 will release their eighth album, '18.61' on April 13 via Deathwish Records. The disc is the follow-up to 2007's 'A New Beat for a Dead Heart' and the first to feature drummer Mike Justian (formerly of Trap Them and Unearth).

'18.61' was recorded in February 2009 in Boston by Alex Garcia Rivera (ex-Give Up the Ghost). Originally, the band planned to record a four-song EP, but the session went so well they kept going. The album includes the songs 'God Talk,' 'Crescent Moon,' 'Reduced,' 'Mannequins,' 'Forever Is Destroyed' and the title track.

"Our desire was to record a raw and stripped down record, and once we hit the studio, things developed so quickly that it was clear that recording just an EP was out of the question," said the band. "Thus the new LP was born."

After the album was recorded, it was remixed by Converge guitarist Kurt Ballou at his Godcity Studio in Salem, Mass.

'18.61' was named after the 61st couplet of the 18th section of Bhagavad Gita, a sacred Hindu scripture that comprises the cornerstone of Krishna theology. Unlike some Krishna bands, 108 are dead serious about their beliefs. Guitarist Vic DiCara even moved to India in the late '90s to become a monk, resulting in an extended hiatus from the band.

Download 108 Songs
Filed Under: Converge, give up the ghost, GiveUpTheGhost, trap them, TrapThem, unearth
Categories: Interviews
Comments
Leave A Comment
Back To Top