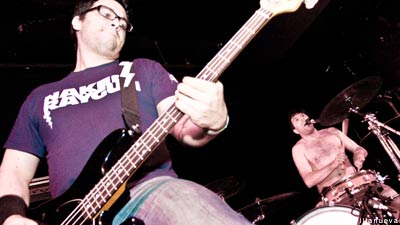 Total F---ing Destruction -- the name along should tip you off their intentions -- exist to grind your skull into a finely milled dust. As they prep their third album, Rich Hoak, fresh off a tour, told Noisecreep that his extreme band hopes for simple pursuits beyond inking a record label deal. "[We hope for] nothing less than universal global enforcement of peace, love and total f---ing destruction for every human," Hoak said.

In typical grind fashion, Hoak spoke in tones of humor and ferocity. "Our music is a message of energy and strength," he said. "In celebration of the slow motion apocalypse, TFD strives to create temporary autonomous zones in the true style of Babylon, to learn and to communicate through art/grind and to share the glorious end of the world party with interested and interesting individuals."

The band hails from Philadelphia, a city notorious for its unforgiving sports fans, its adoration of Rocky Balboa and for producing super extreme underground bands like Starkweather and ... well, TFD. What's in the water in the City of Brotherly Sludge? Why do so many underground bands fester in the region? It's all part of the natural universal order of things. "Nihilism, nothingness, emptiness and nonsense is the agenda of Total F---ing Destruction," Hoak stated, albeit a bit cryptically. "The tap water in Philly is fine. Bottled water is a scam! As for underground bands festering? I am all for it."

Musically, TFD -- in Hoak's delightfully warped mind -- are a "direct and undistorted connection to poetry that speaks to the questions that postmodern crazy f---ed up daily life asks of all people. Our songs are true stories of life in the global techno/military/entertainment megaplex and represent the future/present of human civilization." While you might be thinking "Huh?" at such statements, when you place it in the grind context, it makes total sense. Grind music isn't for the faint of heart, and it certainly goes down like a razor blade milkshake and is supposed to make you think, while assaulting your senses with its auditory violence.

TFD just recorded a whopping 28 new tracks at Mark-It-Zero studios, and in 2010 they're inviting fans to "join us as we grind them worldwide live and digitally in 2010!"

If you've got a backbone and a hankering for ultra-fast musical terror, you can either get on the Total F---ing Destruction train or get bowled over by it.