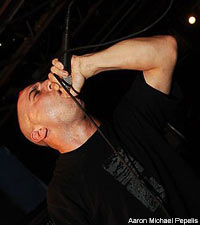 Philadelphia's cult extreme metallers Starkweather are finally releasing the 2007-recorded 'This Sheltering Night' via Deathwish on May 25. It's a win-win situation for both parties, that's for sure. Starkweather's last album, 'Croatoan,' came out all the way back in 2005.

"Deathwish have their bands' interest in mind," singer Rennie Resmini told Noisecreep. "Having musicians in the field, the label has a hands-on and current approach to what is going on. We probably should've worked with them sooner than later. Live and learn."

While Starkweather have been a unit for two decades, they keep going because, well, they sort of have to. "This band is our anger management, stress relief valve," Resmini also said. "View at it as a deranged form of art therapy."

While fans of complex, not-so-easy-on-the-ears music that assaults every one of your senses will be the first sucked into the gravitational pull of 'This Sheltering Night,' that's not to suggest that more mainstream metalheads won't like the album, which is never showy with its playing and always sets a black-hued mood.

"For the casual listener, it will probably be a love/hate experience," Resmini said. "The music is extreme and complex in a dark, brooding, atmospheric setting. It isn't complicated in terms of fretboard gymnastics and disjointed songwriting. It's complex in terms of mood and cohesive songcraft."

Writing and recording a record such as 'This Sheltering Night' wasn't without its stresses and its humor. "At most stressful you can have [producer] Alap [Momin] and [guitarist] Todd [Forkin] pushing each other's buttons, getting on each other's nerves to achieve full-potential in terms of performance," the singer said. "At most humorous, you have Alap's explanation for preferring a particular take of one song over another due to the feel: 'Harry, you don't always have to be a tank, you can be a boat,'" Resmini said, the last point referring to drummer Harry Rosa.

Speaking of tanks, the City of Brotherly Love is known for rolling over visitors, touring bands, sports figures and wayward baseball fans with theft, boos and tasers. It's a town with a reputation for bitterness, so who better to ask than a Philadelphian? "With sports teams, it's simple economics," Resmini said. "You have a lot of blue-collar people spending their cash on tickets and merchandise so when they see a player dog it on the field, court or ice, fans take them to task. With bands, at its worst, it's having their equipment stolen (and burned). Generally it's simply apathetic hipsters."

There are no tour dates on the docket for Starkweather at this time. But that could soon change."We'd like to let the new record saturate for a little bit and gauge whether it is in everyone's best interest to do more than the northeast. I'd like to hit Europe and Japan for the Deathwish releases, so, time will tell," Resmini said.