On Sept. 25, an off-the-wall mockumentary about a rock band comprised of four adult performers called Tight will be hitting stores. The movie follows the titular group as they go out on the road and live out all of the insanity that the rock 'n' roll lifestyle brings.

Tight (the band) features Monica Mayhem, Tuesday Cross, Alicia Andrews and Layla Labelle as they temporarily take leave of the adult industry and try to make it as rock musicians, sweating it out in the clubs under the management of one of the biggest names in the adult industry, and former Charlie Sheen Goddess, Bree Olson.

Recently, Monica Mayhem left the group and was replaced by another adult performer, lead vocalist Kelley Jean, whom Noisecreep had a chance to speak with.

Kelley, how did you get involved with Tight?

I was on YouTube and typed in 'porn star female band' and Tight was the thing that popped up. I was like, 'I would have been perfect for this!' I sent them an email and said if you're ever looking for a singer let me know. The manager wrote me and said, we filmed this in 2010, it's out on the market right now and if we get picked up by a distributor or network, we'll need a singer. So the other singer moved back to Australia, got married and pregnant and there was then an opportunity. So when it got a distributor, Tight's manager called and offered me an audition and I said, 'Sure!' So they sent me the background music, I recorded nine demos and they loved them

What drew you to this?

Have you been into singing for a long time?

I've been singing since I was little kid. I started off with theater – you know, I was the lead in Annie, Peter Pan, Oliver – then I got into the adult field at 18. I started dancing in the clubs and found modeling, then films. After a few years I got out of the clubs and lost track of my music background in the chaos of the adult work. Today, I do a lot of things around here in Detroit. I sang the national anthem for the Charlie Sheen show in Detroit. I danced for Kid Rock's 40th birthday party. Again, it's hard to be taken seriously even though I am seriously musically trained. It blows people away – they see my blonde hair and big ole boobs when I sing karaoke. Then the ladies all laugh until I start to sing and then everyone shuts up.

Maybe there's something unexpected about it – people don't think you have it in you.

That's what Howard Stern said – exactly. He was just shaking his head when we went on his radio show. He said 'I so did not expect you to sound this good. I thought it would be a disaster but I am blown away.' And we won the contest on his show!

What did you listen to growing up?

Growing up, I loved show tunes and theater music. But my dad was in rocks bands- I was at parties in first grade til 3am – so I was raised around music. I liked Pink Floyd, Led Zeppelin, Clapton – but as I got older and started working in strip clubs I got into old school hip-hop like the Beastie Boys, and then electronic music

And what is next for Tight?

We premier the documentary at Cinefest at the Palm in Vegas in early October –we'll all be there. Since we all live all over North America, it's tough to plan a tour right now. But as soon as someone comes up with the backing, we'll be there. 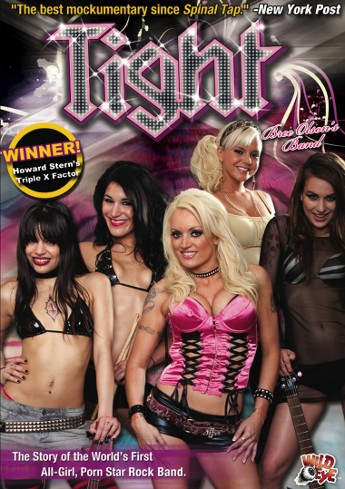 The Tight DVD will be out on Sept. 25 and is available for pre-order at this link.