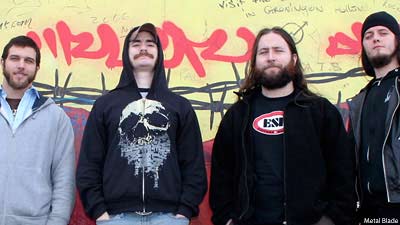 He doesn't look like a Gunface. So why in the world does the Red Chord guitarist Mike 'Gunface' McKenzie go by such a moniker? The strange name instantly reminds us of the scene in 'Wayne's World,' when Wayne's 'psycho hosebeast' ex-girlfriend Stacy presents him with a gun rack as a gift, prompting the response that he doesn't own a gun, much less several guns to necessitate ownership of a gun rack!

"We always quote that exact part, whenever we're on tour with Walls of Jericho! Chris, their guitarist, refers to anything singularly with 'a,' like 'a' burger," Gunface told Noisecreep, who was totally feeling our reference and connection between his name and that scene. As it turns out, he has another similarity with Wayne. Both had cable access TV shows!

"The nickname came from before I joined the band. I had a cable access show, so that's also funny that you bring up 'Wayne's World,'" the guitarist elaborated. "I did ridiculous skits on the show with my friends in weird scenarios. I called it 'Gunface,' because I thought it sounded absurd, like the [content of the] show. Our old guitarist called me that because our drummer was named Mike, and we needed to differentiate between the two Mikes. I didn't think it would catch on, but it did."

'Gunface' wasn't his first choice of name for the program, either. "I am glad I didn't name the show, 'Bakeryface,' which I was thinking of doing, because then people would call me that. But that name may not have caught on. It has too many syllables." Gunface also revealed that he might even put episodes of his namesake show on YouTube eventually, saying, "It was me, without the beard, 10 years younger and 40 pounds heavier. So many people think my name is 'Gunface' because it sounds brutal, but it is really just from a silly show, with me acting like an idiot when I was 19!"

Another interesting factoid about Gunface is that while he plays his guitar with his left hand, he isn't a southpaw. "I do everything normally with my right hand," he said. "Many guitarists start out as lefties and want to play left-handed, but they learn to play righty. It's kind of a curse for me. I can't play my friends' guitars. Like if they get a new custom guitar and say, 'Check it out!' Everyone else plays it, and I can't touch it unless I play it upside down."